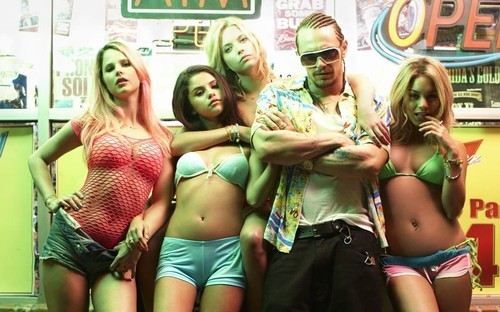 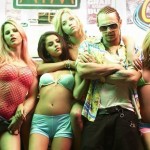 Terrible. If you have any standards for film, DO NOT see Spring Breakers. It is by far one of the worst movies I’ve ever seen. Director Harmony Korine scraps together 94 minutes of screen time that culminates into an utter disaster. There is no plot, not a single relatable character or any sort of saving grace that can earn it a thumbs-up. You will find the narrative boring, the acting overdone and find points downright irritating. If you have any strand of dignity within, spare yourself from this nightmare.

Spring Breakers is an inconceivable drama that centers around a dynamic group of rebellious college girls. Faith, played by Selena Gomez (“Ramona and Beezus“) is the only sane girl in the group, questioning the airheaded tactics of her friends. She remains slightly philosophical throughout, and provides the movie with the only snippets of real buoyancy. The rest of the “crew” is rounded out with Candy (Vanessa Hudgens, “Journey 2: The Mysterious Island“), Brit (Ashley Benson, “Pretty Little Liars” TV series) and Cotty (Rachel Korine, “The Fourth Dimension“). Struggling to cope with the monotonous lifestyle of college, the girls dabble in cocaine, marijuana and an edgy lifestyle. Low on cash, they decide to rob a local store with squirt guns and heated rhetoric. With money in hand, their escapade to Florida sun and fun is now possible.

Hopping on a bus to the land of “liberation,” they dabble in a gilded lifestyle of hard drugs and erotic partying. Bordering pornography, the spring-break scenes see naked breasts left and right and even multiple lines of drugs being snorted off the lower torso of an exposed female. Storming-trooping their way through the Florida nightlife, they befriend trashy looking twins who end up summoning police. Stuck in a county jail (ironically only clothed in bikinis), they are sentenced to two days in prison and given citations, but their stay is cut short with the news of someone bailing them out.

That someone is pimp-like, hustling Caucasian gangster “Alien,” played by James Franco (“Oz: The Great and Powerful“) who is looking to incorporate them into his illegal lifestyle. His drug-wielding ring sells pounds of marijuana and hard drugs at night, and by day Alien raps to half-naked beachgoers. Uncomfortable with the whole scene, Faith, the Socrates of the group (and hence only one with a brain), dashes towards home while she can, leaving the rest of her entourage to “suffer” with Alien.

But as the narrative (sadly) trudges forward, a turf war emerges and viewers who care (of which I was not one) are left questioning whether the posse of oppositional college girls will all safely make their way back home to their religious college.

Trying her damnedest to save this doomed vessel is Selena Gomez. Short on acting experience but large in heart and appeal, Gomez brings the only fragment of reality to the screen. She is believable, almost relatable and even quite appropriate to feel sympathetic for. But right when you think the narrative arc would supplant something “real” with viewers, Gomez is kicked off the screen, hastily shipped right back to her college, never to be seen again. Oh, how draining this was. Franco rounds out the other noteworthy performance, but in an awful way. Taking this role, one could argue, was the most diminutive move he could ever make. I now think wholly less of him, and it is sad, because his performance in Oz was commendable. The other girls were just outright irritating although they are NOT afraid to expose some serious skin. 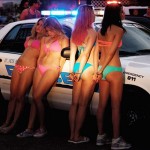 As for the production values, well, there is not really much to praise here either. The pace of Spring Breakers was slow, there were no memorable scenes, and the cinematography was boring, repetitive and further draining on the film’s appeal. Benoît Debie: You could have done much better. And dare I say, the pool and beach nudity scenes were just awkward and disturbing at times. I felt uncomfortable sitting in the theater with viewers on either side of me watching what basically amounted to softcore porn. But, I must say, the casting director, Laray Mayfield, did do a fine job in landing the four girls (two bona fide ex-Disney princesses) — at least visually they have the “WOW factor.”

But usually Harmony Korine has a message hidden away in his films. Yet even after putting my thinking-cap on, I struggled to find any underlying meanings within Spring Breakers. Even John Locke, Francis Bacon, Thomas Hobbes, (or, insert random English philosopher here) would have trouble pinpointing some sort of life meaning for the film. Maybe, when we really apply the script, it brings forth the cataclysm of the stresses facing modern teenagers. It also displays the fearful nightlife of urban areas, perhaps suggesting turf wars, drug smuggling and the “hustler” lifestyle is overtly draining on the entire economy. I suppose if you dare watch it, you can ponder the significance yourself.

But seriously, don’t dare watch it. Your money, time and sanity is best spent elsewhere than on this seemingly meaningless, fustian film. Franco’s character, says two words repeatedly throughout Spring Breakers that really ring clear, they are: “shit” and “ya’ll.” So channeling my best Alien I say to you, “Stay away ya’ll, this film is just utter shit.” 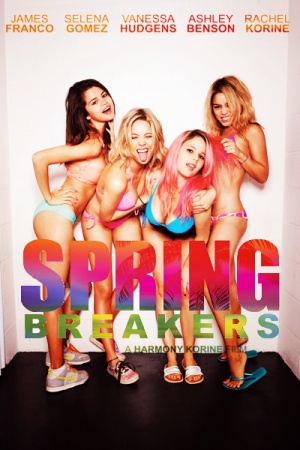