No doubt, Disney and Lucasfilm were faced with a monumental task by ending the Skywalker saga — the ninth film in a franchise that changed the course of filmmaking and introduced generations of viewers to freewheeling, space-opera arcs and settings. Inherent in that task: The risk of polarizing a temperamental fan base and bookending “Star Wars” with a “lukewarm” sendoff.

Despite the odds, Star Wars: The Rise of Skywalker, helmed by “Star Wars: The Force Awakens” scribe and mastermind, J.J. Abrams, checks many boxes, the most important of which is honoring creator George Lucas’ mythology and the ensemble that has garnered such fame over the decades. His finale is ultimately a nearly two-and-a-half-hour homage to the Jedi, the Skywalkers, the Resistance, the Sith, Emperor Palpatine and the overarching lore of Lucas’ original trilogy.

Where this most recent film lacks, however, is in overall narrative competency. This issue will always lead back to the latest trilogy’s directional tug of war and competing philosophies: A Galaxy propelled by midichlorians and blood lines, or walking back that concept to suggest a commoner can ascend to the greatest heights (think Rey’s humble origins, or the broom and the stable boy in “Star Wars: The Last Jedi”). “Star Wars: The Last Jedi,” directed and written by Rian Johnson, suggested the latter, while Abrams’ intro and outro suggest The Chosen One is real; the Skywalkers’ royal blood and ever-exclusive Jedi council are the real vehicles to success. The result: An uneven trilogy that, while technically sound and visually stunning, does not leave fans with a “Force balance.”

Here, Rey (Daisy Ridley, “Murder on the Orient Express”), Finn (John Boyega, “Detroit”) and Poe Dameron (Oscar Isaac, “Triple Frontier”) continue to build and inspire the Resistance — Rey in Jedi training, and Finn and Poe patrolling the Galaxy. When rumors swirl that the long-dead Emperor Palpatine (Ian McDiarmid, “The Lost City of Z”) has returned to recreate the Empire, Rey must find a lone Sith “wayfinder,” a search that takes her across the Galaxy and into direct conflict with the new Supreme Leader of the First Order, Kylo Ren (Adam Driver, “Marriage Story”). Both use the Force to wear down the other, a grueling battle of good versus evil.

Meanwhile, General Leia Organa (Carrie Fisher) presses on against the First Order aided by the aforementioned Rey, Poe and Finn, as well as Han Solo’s former co-pilot Chewbacca (Joonas Suotamo), droids R2-D2, C-3PO (Anthony Daniels) and BB-8, and other fan favorites. The group opts to accompany Rey on her Jedi mission — of tracking down the Emperor on the hidden planet of Exegol. Along the way, they’re pitted against the likes of a former Jedi hunter named Ochi, the growing fanaticism of Allegiant General Pryde (Richard E. Grant, “Can You Ever Forgive Me?”) and Kylo Ren’s plot to take the Sith throne for both himself and a “bride” of the Dark Side.

By its fiery third act, Star Wars: The Rise of Skywalker becomes an edge-of-your-seat thrill ride (albeit a choppy one) on the Falcon alongside this likable ensemble, as it attempts to combat the apparent underground Sith fleet. Rey must also face her past — in a confrontation she always knew was inevitable.

Altogether, most fans of the decades-old franchise are apt to appreciate the scale and grandeur of any “Star Wars” film — Star Wars: The Rise of Skywalker included. Abrams keeps a tight rein on his film — including narrative risk — but offers fans a glimpse of “Star Wars” past, adding a handful of peripheral characters that draw a smile and continue to populate the franchise’s enormous film universe. Better yet are the performances of Ridley and Driver as they wrestle with their past, shared ambitions and dueling lightsabers. The acting — at least at its core — is strong, augmented by cinematographer Dan Mindel’s colorful lens, John Williams’ profound score and capable editing from Maryann Brandon and Stefan Grube.

If Star Wars: The Rise of Skywalker has written its own short-term legacy, it is that of an ambitious film paying respect to its fandom while guiding a new trio — very much similar to Luke, Leia and Han — to the scrolls of history and Jedi texts. Where Johnson branched out toward his own view of the Galaxy, Abrams swiftly pulled the Force back to familiar surroundings: In Imperial cruisers, Resistance X-wings and Force-spirit wisdom. How the long-term interpretation of Star Wars: The Rise of Skywalker will play out, remains to be seen. In the meantime, let’s praise the work — and sheer influence — of the game-changing Skywalker saga. The Force will be with this franchise, always. 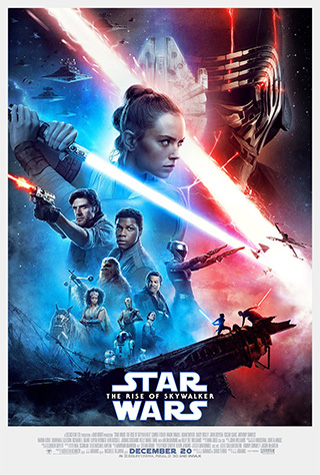