“What love actually is, is the experience that someone else is all right exactly the way they are.” — Werner Erhard

Noah Baumbach’s (“The Meyerowitz Stories”) Marriage Story is a penetrating look at the spiraling effect of divorce American style on those involved, one that radiates compassion for its beleaguered characters Nicole (Scarlett Johansson, “Avengers: Endgame”) and Charlie (Adam Driver, “BlacKkKlansman”) as they struggle to maintain their dignity through a dehumanizing process. If love means never having to say you’re sorry, you are probably not living on planet Earth, though I’m sure other places may have their compensations. For Nicole and Charlie, however, just saying “I’m sorry” will not even reach the tip of the iceberg.

Nicole is a native of Los Angeles who left a budding movie career on the West Coast to move to New York with their young son Henry (Azhy Robertson, “After the Wedding”) to star in the productions of her husband Charlie, an acclaimed theater director. In his role as Charlie, Driver is consistently brilliant in his portrayal of a man on the brink of despair, desperately trying to hold his life together in the face of fast changing circumstances, while Johansson has that uncommon quality that makes you care deeply about her. We first meet the two through film montages in which they discuss each other’s virtues and idiosyncrasies, love letters asserting the qualities that they find endearing.

Nicole loves that Charlie is organized and dresses without embarrassing her. Charlie loves the way Nicole cuts his hair and makes tea and leaves it around the house. Charlie talks about his wife’s devotion to playing with their son and how patient she is. To Nicole (who refuses to read hers out loud), Charlie never gets upset about the little things and is really a talented director. Unfortunately, we soon find out that the tributes were only written at the request of a marriage mediator as part of the couple’s plans for divorce. Nicole refuses the request to read it aloud, however, and leaves the room in a fit of temper. This becomes more understandable when we learn that she has decided to take Henry with her to L.A. to shoot a TV pilot and pursue her movie ambitions.

Complicating the situation is the fact that Charlie has just received a MacArthur Fellowship and has agreed to live in New York. Further muddying the water is Charlie’s affair with a woman at his theater company. Although Charlie believes Nicole plans to move back to New York after the shoot, she has other ideas and the thought of having to travel back and forth on a 3,000 mile trip to see his son does not sit well with Charlie. It seems to be resolved, however, when during his visit to California, he ends up being served divorce papers by Nicole’s sister Cassie (Merritt Wever, “Greenberg”) in one of the funniest scenes in a film in which humor is sparse but always welcome.

What starts out as an amicable separation between two people who treat each other with respect turns into a circus, however, when high-priced, aggressive, and uncaring lawyers, Laura Dern (“Star Wars: The Last Jedi”), Ray Liotta (“The Son of No One”) and Alan Alda (“Bridge of Spies”) come into the picture and the weather forecast becomes cloudy with a likelihood of rain. Fighting a custody battle for Henry, Dern is exceptional as Nicole’s lawyer Nora Fanshaw, an outwardly warm and caring person, but underneath a saber-toothed cat who delivers a crusading speech about the different expectations for a woman. Charlie’s second lawyer after the amiable, but too laid back, Bert Spitz (Alda) is Jay (Liotta in his best role since 2012’s “The Place Beyond the Pines”).

Jay is up front about the financial cost ($950 an hour) as well as the emotional cost in turning resolvable differences into attack weapons to corner and belittle his adversary. With some personal experience in the matter, Baumbach does his best not to show preference for either aggrieved party, but depicts the divorce process to be one that is filled with gladiator-like combat that only serves to draw the contesting parties further apart. While it is obvious that the charming, self-absorbed Charlie should have shown more awareness of Nicole’s needs for a career of her own, it is equally the case that his wife’s ability to communicate her needs was inadequate.

If “love is a function of communication,” Nicole and Charlie forgot it somewhere along the way. The film’s emotional high point is the animated, accusatory conversation between husband and wife, perhaps better described as a shouting match. Though well-written, the verbal sparring becomes overwrought, though it mercifully ignores excessive use of the “F” and “S” words, so lazily prevalent in today’s culture as a substitute for thoughtful dialogue and wit. While Marriage Story covers a lot of ground and is open to many interpretations, it all but stays away from any deep examination of the larger issues in a relationship such as commitment, responsibility, and communication, the cornerstones of any successful marriage. 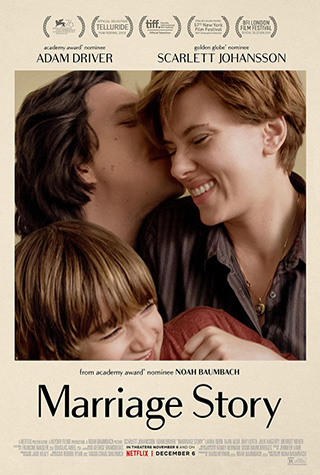