Politicians spouting foolish and frightening rhetoric is almost run of the mill these days. As a result, recollections of simpler times are suggested by news footage of Tony Blair and George W. Bush talking about weapons of mass destruction, the invasion of Iraq and UN resolutions, times before the confusion of Brexit Britain and Trump’s America. Official Secrets recognizes this recollection and uses the true story of Katharine Gun to highlight the vigilance we must maintain and the defiance we must show against oppression and coercion. Gun was a communications analyst at the UK’s Government Communications Headquarters (a British equivalent of the NSA) who, in 2003, leaked a report about future surveillance plans to the British press. Charged under the Official Secrets Act, Gun’s case became a cause de célèbre about the line between national security and public duty. In its dramatization of this true story, Official Secrets not only works as a distressing and gripping thriller, but also points to a moment in the developments that brought us to the current state of the world.

Beginning with the picture of domesticity with Katharine (Keira Knightley, “Berlin, I Love You”) and husband Kamal Ahmed (Ray Panthaki, “Colette”) practicing sexual positions in their quaint terraced house in Cheltenham, director Gavin Hood and screenwriters Gregory Bernstein and Sara Bernstein weave together various genres in this whistleblower story. The domestic scenes of Katharine and Kamal are British kitchen sink drama, albeit with occasional rants at the aforementioned TV broadcasts. Meanwhile, sequences of Katharine at work and her surreptitious meetings to leak the information convey the terseness and urgency of the spy thriller. When Katharine’s leak finds its way via a net of sources to Martin Bright (Matt Smith, “Pride and Prejudice and Zombies”) at the “Observer” newspaper, tropes of the journalism thriller pick up, especially “Spotlight” and “The Post,” as well as an explicit reference to “All The President’s Men.” Finally, as charges are brought against Katharine, the legal drama enters the mix with Ralph Fiennes (“The Grand Budapest Hotel”) fairly chewing the scenery as Katharine’s lawyer Ben Emerson.

Despite these generic swerves, Official Secrets is a coherent and compelling watch. Knightley is magnetic in the lead role, Katharine’s pain and fear etched across her face with a brittle resolve. Panthaki has a rather underwritten role, Kamal’s racial identity more significant than his character. Some of the “Observer” staff are clichés, especially editor Roger Alton (Conleth Hill, “The Isle”) who regularly bellows at his workers, while Rhys Ifans (“The Amazing Spider-Man”) is a hoot as crusading journalist Ed Vulliamy.

Despite these ostentations, the overall mood of the film is somber, as director Hood brings much of the murky morality and nerve-wracking tension that he did to “Rendition” and “Eye in the Sky.” The malevolent forces that threaten Katharine are kept in the background, their public faces appearing in further news footage as the Iraq War begins, and visiting police officers. These officers of the law insist that they are simply doing their job, but simultaneously they manifest oppressive government machinery. Various references to legislative changes around the Official Secrets Act highlight the legality of such machinery, and while the film is clearly on Katharine’s side it does not collapse into hagiography of her. Praise from friends is mixed with regular reminders that Katharine has nothing to gain and everything to lose by her actions. Perhaps the film’s closest cinematic cousin, therefore, is “The Insider,” another tale of real-life heroism and the punishment meted out to those who dare to speak out and challenge the status quo. Like that film, Official Secrets may not find a wide audience, but it remains a gripping and effective drama of courage and sacrifice, one that remains all the more pertinent today. 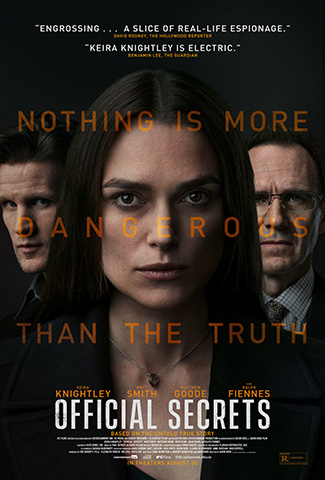