Except for unrelenting bulldogs like Seymour Hersh (who had to publish his latest article outside of the U.S.), true investigative journalism seems to have become as obsolete as the 8-Track Tape. Tom McCarthy’s (“The Cobbler”) Spotlight, however, reminds us of what it was and what it still could be. Set in Boston, the film is named after the Pulitzer Prize winning investigative unit of The Boston Globe which, in the years following 9/11, investigated the abuse of children by parish priests and the link of silence that existed between the Catholic Church and the Boston political and business community. It was a silence that allowed offending priests off the hook for their crimes, being transferred from parish to parish where they often re-offended.

In the film which follows the journalistic procedural style of such classics as “All the President’s Men,” Michael Keaton (“Birdman”) is Globe Unit Editor, Walter “Robby” Robinson. When the story circulates about the church’s kid gloves treatment of molester Father John Geoghan, the paper’s editor-in-chief Marty Baron (Liev Schreiber, “Pawn Sacrifice”), newly arrived from The Miami Herald and not bound by local “traditions” or religious loyalties, assigns the Spotlight unit to dig into the story. Robby and his team that consists of reporters Michael Rezendes (Mark Ruffalo, “Foxcatcher”), Sacha Pfeiffer (Rachel McAdams, “Southpaw”) and Matt Carroll (Brian d’Arcy James, “Time Out of Mind”), overseen by deputy managing editor Ben Bradlee Jr. (John Slattery, “Ant-Man”) set about the nitty-gritty work of tracking down the offending clerics.

Baron, however, wants to expose the systemic corruption in the church, not just individual priests and guns for top church officials such as Boston’s Cardinal Bernard Law (Len Cariou, “Prisoners”). While the case is being built step-by-step, the film shows how some leads go nowhere while others uncover a wider net than imagined. Coming up against the church`s stonewalling, documents that have been made unavailable or have strangely disappeared, and a sleazy attorney in the D.A`s office (Billy Crudup, “Public Enemies”), the team reaches out to Phil Saviano (Neal Huff, “The Grand Budapest Hotel”) who heads an organization dedicated to supporting abuse victims as well as attorney Mitchell Garabedian (Stanley Tucci, “Transformers: Age of Extinction”) who represents victims that are suing the church in a class-action lawsuit and is an important source of information. It is the interviews with the victims arranged by Garabedian that constitute some of the film’s most moving moments.

Especially touching is the story of Joe, beautifully performed by Michael Cyril Creighton (“Sleeping with Other People”), an openly gay man who looked up to the priest as the representative of God and felt flattered by the cleric’s attention and the realization that it was okay to be gay but only later realized the priest’s culpable behavior. One of the film’s best lines is when Garabedian, speaking of the agreement within the church to maintain their silence, says, “If it takes a village to raise a child, it takes a village to abuse one.” Another impactful scene delves into the mindset of one of the offenders. In Pfeiffer’s interview of ex-priest Father Ronald Paquin (Richard O’Rourke, “Ghost Town”), he admits to “fooling around” with the boys but says he never derived any pleasure from it.

Undoubtedly the boys did not derive much pleasure either. One psychologist claims the priests have remained emotional preadolescence, but this over-generalized speculation does not add much clarity to the debate. As the head of an outstanding ensemble cast, Michael Keaton performance has depth and sensitivity, Ruffalo brilliantly captures the almost obsessively focused dedication of Rezendes, and McAdams is able to astutely demonstrate empathy, allowing the subjects of her interviews to feel safe in expressing their feelings.

McCarthy delivers the story with restraint and a balanced approach, showing the indifference of Globe reporters who sat on pertinent information they had about the scandal many years ago. While Spotlight does not have much style and can drag, the strength of its performances and the clear presentation of its subject matter has a strong impact, allowing us to feel the pain of the children who still suffer the effects of abuse and reminds us that, as Kahlil Gibran put it, “Safeguarding the rights of others is the most noble and beautiful end of a human being.” 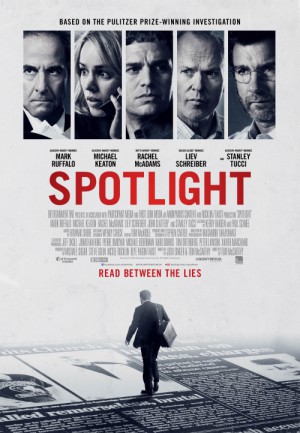