What would the Christmas season be without another movie where a dysfunctional family comes together in a star-studded ensemble production to sort out their personal problems and realize that their past histories and neurosis cannot keep them down? That despite what hatred and apathy they may feel for one another, in realty, like almost ALL families, they still love each other? To say this kind of thing has been done to death would be an understatement (remember such gems as “Surviving Christmas,” “Everybody’s Fine,” “Four Christmases,” “Home For the Holidays” and “Nothing Like the Holidays,” among others). Even more depressing, it’s a concept that’s rarely done well. Love the Coopers makes some interesting choices in its effort to put a fresh spin on a rather tepid concept, and while some of those choices fall flat, there are still some decent moments, as well (just not enough to make this terribly interesting or enjoyable).

The central characters are Sam and Charlotte Cooper (John Goodman, “The Monuments Men” and Diane Keaton, “Morning Glory”), a couple who are considering ending their marriage while the whole clan gets together for Christmas. Their various family members also each have some kind of domestic situation. Charlotte’s confused daughter Eleanor (Olivia Wilde, “The Lazarus Effect”) is so afraid of disappointing her parents (again) that she convinces a soldier she meets in an airport bar, Joe (Jake Lacy, “Carol”) to be her pretend boyfriend, despite their religious, political and personality differences. Charlotte’s envious sister Emma (Marisa Tomei, “Parental Guidance”) gets busted for shoplifting and ends up trying to psychoanalyze the arresting officer (Anthony Mackie, in his 10th film of the year, including “Ant-Man,” “Avengers: Age of Ultron” and “The Night Before”).

Meanwhile, her father, Bucky (Alan Arkin, “Argo”), is distraught to learn that his favorite diner waitress, Ruby (Amanda Seyfried, “Ted 2”), is planning to move to a place called Hot Coffee, Miss), while son, Hank (Ed Helms, “Vacation”) can’t bring himself to tell his wife (Alex Borstein, the voice of Lois on “Family Guy” TV series) that he’s lost his job as a photographer at Sears, while his three children run the gauntlet from the cute and scheming Bo (Maxwell Simkins, “About Ray”) to the dorky and embarrassing Charlie (Timothée Chalamet, “Men, Women & Children”) to the precocious and sweet Madison (Blake Baumgartner).

Directed by Jessie Nelson (“I Am Sam”) with screenwriting assistance Steven Rogers (“Kate & Leopold,” “P.S. I Love You,” “Stepmom”), Love the Coopers has it’s share of schmaltz, but that attribute is what keeps it from going completely into the discount gift bin at Wal-Mart. This is because the so-called comedic moments mostly deflate before our very eyes (the family dog, “Rags” eats everything in sight; Madison calls everyone a “dick” and Charlie and his girlfriend kiss each other like two mentally-deranged slobbering guppies). With its heavy emphasis on the dramatic, the movie takes kind of a different approach with this material. To begin with here’s an extensive use of narration (provided by Steve Martin) that let’s us know the characters’ internal motivations. It also relies on the flashback to clues us into what exactly set the characters off on the tangent that affects them in the present.

The most powerful of these sequences is when Charlotte and Sam remember the early stages of their romance and how they were before children, jobs, bitterness and life intervened. We also see how Emma first allowed her jealousy to first overtake her love for her sibling. Arkin gets a few nice scenes, too, especially when he discusses classic films (“City Lights” and “Born Yesterday,” among them) with Ruby, and Wilde rides an emotional roller coaster trying to build an emotional wall against Joe all the while falling for him. And, despite the genre regurgitation, there are some very nice moments.

Unfortunately, Nelson sees fit to also populate Love the Coopers with some completely ridiculous situations (an addled aunt, June Squibb, “Nebraska,” breaks wind during a family prayer; Madison becomes disillusioned when see sees multiple Santas on the street; and, the worst of which sees Wilde running through a crowded hospital — yes, the picture ends in the emergency room — knocking down everyone in her way — including an assumed severely injured patient on a gurney — just to get to Joe before everyone dances their troubles away in the infirmary cafeteria. Oh, what could have been. 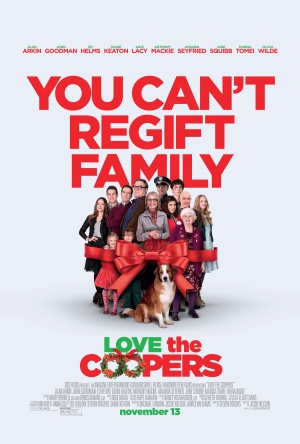