Finally, it’s here, the film not a single person has been waiting for, Men, Women & Children, essentially Jason Reitman’s “Reefer Madness” for the digital age, is a decade late tonally conflicted mess that completely misses its mark. The first comparison that comes to mind for this film, honestly, is the beginning of “Troll 2;” that is the extent to which this farce fails to understand and recreate the average American teenager on screen. What’s most frustrating about the whole thing is that Reitman, if anyone, should know better; this is the man who brought us “Juno,” the quintessential Oscar-winning portrayal of realistic teenager characters which, seven years later, is still widely quoted and highly revered.

Ansel Elgort (“Divergent”) is Tim Mooney, a high schooler whose mother has abandoned the family, as we are repeatedly told, “for California” (because apparently you can leave people for states), prompting his resignation from the football team. Like many other completely normal boys, Tim begins to occupy his afternoons with video games instead. As Emma Thompson’s wholly unnecessary and inconsistent narration explains, this is devastating to Tim’s father Kent (Dean Norris, “Breaking Bad” television series) because, for them, football had become “a language for which there was no substitute.”

Tim’s love interest, Brandy Beltmeyer (Kaitlyn Dever, “Short Term 12”), has her own problems. Her mother Patricia (Jennifer Garner, “Dallas Buyers Club”), a helicopter mom so outrageous she could probably stand to take parenting advice from the mother in “Carrie,” knows all of Brandy’s passwords, reads all of her conversations, records all of her keystrokes, and even goes through her phone. Patricia has even gone so far as to hold meetings with other parents, during which she warns them about the extreme dangers of the internet as if it’s some brand new penicillin resistant STD, rather than an inanimate tool that was first conceived in the 1960s and has since become ubiquitous, absolutely, but not evil.

The strangest thing about Patricia’s meetings is that none of the other parents seem to have much of a desire or logical reason to be there. Kent’s son has been playing video games a lot, sure, but Kent doesn’t even seem to understand them enough to be afraid. Don and Helen Truby (Adam Sandler, “Just Go with It” and Rosemarie DeWitt, “The Watch”) have a porn addicted son, or something, but their story line is such a mess I’m not even going to touch it. The most interesting questions at Patricia’s meetings are asked by Donna Clint (Judy Greer, “The Descendants”), who runs a website intended to support her daughter Hannah’s (Olivia Crocicchia, “Teacher of the Year”) modeling career. On the website, Donna posts pictures of Hannah in sexually suggestive costumes and poses to be sold to subscribers who request them.

Donna and Hannah’s predicament is by far the most compelling story line in Men, Women & Children, and without a doubt had the potential to have been its own, significantly better, film. Imagine flashbacks of a young Donna trying to become a famous actress herself, consistently losing work because she’s “not sexy enough.” Flash forward to Donna taking a pre-teen Hannah to a talent agent in hopes of a vicarious second chance, and seeing other girls Hannah’s age posing inappropriately in hardly any clothes. Donna proceeds to make the website, under the genuine impression that what she is doing is furthering Hannah’s career. You see Donna sifting through her inbox for a legitimate job offer and sliding past the creepy comments of strangers, and maybe even a message from an unknown concerned parent warning her of the possible ramifications of putting her daughter’s name and likeness online. Maybe, one day, one of Hannah’s skeevy followers shows up at the house, or at the school, or at a football game while she cheers. That movie, if it existed, would be an interesting look into the body image expectations, recklessness in regards to personal safety, and desire for fame that are actually indicative of the impact of the internet/social media/omnipresence of cell phones/technology in general that exists today.

Watching Men, Women & Children, it’s not only easy to forget Reitman’s previous successes, but also the fact that the man is a mere thirty-six years old. Men, Women & Children reads more like a cautionary tale conceived by an Appalachia-dwelling senior citizen who’s never even seen a computer, but has heard rumors about those danged celebrity photo leaks and considers it his mission to warn the world.

The point is, people have been making movies about the dangers of too much reliance on technology since “WarGames” and “The Terminator” in the 1980s. It’s a shame that Men, Women & Children, which could have actually talked about the way that adolescent obsessions with porn can desensitize teens to the realities of their own physicality, or how easy marital infidelity is to both commit and hide in the modern age, or what happens when people replace tangible interactions with virtual relationships rather than resolving the actual conflicts in their non-digital lives, or any number of things, really, instead says nothing at all. If you actually are interested in seeing a movie that does, watch something like “Hard Candy” or the documentary “TalhotBlond” instead, not this ridiculous wreck. 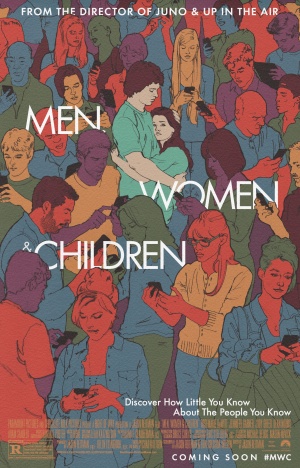