When Kylie Bucknell is sentenced to house arrest for her part in the robbery of an ATM, she thinks that living with her estranged, overbearing mother will be her biggest problems. The noncorporeal resident of the house, however, has other plans in this horror comedy from New Zealand, Housebound.

Kylie (Morgana O’Reilly, “We Feel Fine”) is none too pleased to be at her new/old home. She’s a rebel, this one, and she left home quite some time ago. Her mother Miriam (Rima Te Wiata, “Hunt for the Wilderpeople”) is a notorious gossip and busybody whose disappointment in her daughter’s chosen vocation sometimes rises to the surface. Miriam means well, but Kylie’s aloof attitude and withering glares do nothing to ease the tension between them. When Kylie learns that her mom thinks the house is haunted, that’s just more ammo for daughter to use against mother.

But is Miriam crazy? Kylie sure thinks so, but then . . . yes, then she begins to experience weird phenomena herself. Stuff like scraping noises in the basement or a phone with a phantom ring. When Kylie has an encounter of the third kind, she’s convinced, as would I be, as I’m sure anyone would be. Seeing what Kylie sees, in a basement lit only by a flashlight, is perfectly designed to startle and befuddle.

Miriam’s house arrest is monitored by a local contractor named Amos (Glen-Paul Waru, “The Barefoot Bandits” TV series), who also doubles as a paranormal investigator. He sets up the usual gadgets — cameras, temperature sensors, and the like. Kylie’s court-appointed therapist Dennis (Cameron Rhodes, “We’re Here to Help”) downplays the weird circumstances, deducing that Kylie’s overactive imagination is due to her desire to leave the house (again). Some detective work by Kylie and Amos reveals the identity of the previous owners of the house and why the property was sold, and at that point we no longer have just a ghost story but also a twisty murder mystery. The game is afoot!

Almost all of the action of Housebound takes place within the house, since Kylie can make it to just short of the end of the driveway according to her stylish ankle bracelet. This makes for some exciting scenes, both without and within the walls themselves. By the time the movie’s over, a trip to the basement isn’t even the worst thing you can do! But who owned this place? What happened there? And finally, what’s with the reclusive, crazy-looking neighbor who routinely skins squirrels and the like? I really enjoyed how well shot this movie was (by Simon Riera); even in near darkness and even with quick-paced action, it’s not impossible to tell what’s going on and to whom. No mean feat.

A lot of fantastic performances here too: O’Reilly, as the resentful-yet-vulnerable Kylie; Wiata as the slightly balmy Miriam; Waru as the resourceful rent-a-cop. It really is O’Reilly’s show here, since she’s our protagonist, and she aces the role. The wild, frenetic pace of the movie matches Kylie’s personality perfectly; the low-key direction by Gerard Johnstone (his feature debut) does plenty to propel the film without allowing it to become bogged down in mystical trivia. There’s less time for reflection in this movie and more time for visceral reaction.

Housebound is both scary and hilarious, a terrific entry into the Spooky Movie International Horror Movie Festival. 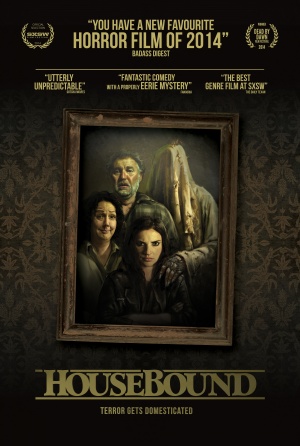