Well, Britain’s bombastic booze-loving fashion figureheads are back for some familiar naughty fun and frolicking, so committed “AbFab” fans can rejoice. So brace yourself “sweetie darlings” as TV-based drunken divas Patsy and Edina make their boisterous and cheeky return to the big screen in the off-kilter and shrewdly amusing, Absolutely Fabulous: The Movie.

The movie is an adaptation of the highly popular British sitcom “Absolutely Fabulous” which originally aired on the BBC network. Saunders, the creative mastermind behind the pop cultural phenomenon first started out as a “French & Saunders” (as in Dawn French and Jennifer Saunders) sketch before finding its firm footing as a television series until dismissing production in the summer of 2012. Now four years later, Saunders with Joanna Lumley (“The Wolf of Wall Street”) are back as the alcohol-sipping, flamboyant fashionistas embroiled in yet another scandalous romp.

As loyal and nostalgic “AbFab” enthusiasts already know, the premise involves the London-based lushes: Middle-aged divorcee Edina “Eddy” Monsoon (Saunders) and hanger-on Patsy Stone (Lumley) both curiously successful in the local fashion industry despite their heavy-handed indulgences. Both rough-around-the-edge women are hardened in drinking, chain-smoking, shopping, clubbing, and man-hunting while trying to desperately cling to their youth-oriented recklessness. Somehow Edina and Patsy manage to juggle their high-powered fashion careers with the extreme cartoonish vices that make them rather . . . colorfully erratic.

The running gag in the off-balance jocularity centered in this riotous storm, however, is the sensible yet long-suffering Saffron (Julia Sawalha), Edina’s grounded daughter who has been forced since childhood to keep her protective eye on her self-destructive mother and her smashed cohort Patsy whenever they get into the latest saucy mess that has been initiated by their hilarious hedonism. Often reluctant in totally tolerating Edina’s chaotic whims, poor Saffron is forced to be the headstrong “mother figure” to the inebriated woman-child (and her surly boozy buddy Patsy) that is the wacky woman she calls Mom.

In Absolutely Fabulous: The Movie, the swinging and sordid sensation that is the tipsy tandem is even more pronounced than ever. Director Mandie Fletcher skillfully fleshes out the over-the-top impishness of the flighty ladies and encourages the fun-loving damage and disarray to unfold as only Saunders’s Edina Monsoon and Lumley’s Patsy Stone can instinctively muster up. Set against the eye-popping background of exotic locales and basking in splashy and unconventional wardrobes Absolutely Fabulous: The Movie dutifully reinforces the intoxicating zaniness that had made Edina and Patsy the celebrated cockeyed cougars adored by many.

It is still a welcomed revelation to witness the party-hearty maturing misfits revel in animated bad behavior. Indeed, Edina and Patsy are still trying to live the high-life as they frequent various fashion events around town. However, the reality is that Edina is financially strapped as her PR firm has not been profiting richly for her. When your clients only consist of has-been songbirds Lulu and Emma “Baby Spice” Bunton then it is certainly time to hit the panic button. Still, this does not stop Edina and Patsy from making their unruly presence known throughout the fashion scene around London.

At one particular fabulous party the mischievousness heightens when Edina accidentally sends supermodel Kate Moss reeling into the Thames. Believed to have perished as the result of this clumsy incident, Kate is pronounced dead and Edina is arrested and scrutinized. This, of course, causes a public relations nightmare for Edina, Patsy and Edina’s granddaughter Lola (Indeyarna Donaldson-Holness). The paparazzi (you know . . . the menacing media hounds known as today’s “villainous vultures”) are increasingly intrusive to the point that Edina and Patsy flee to the South of France to escape the glitzy backlash.

Anyone not acquainted with the lunacy in the “AbFab” universe will probably see this film as an extended TV episode catering exclusively to the show’s devoted fanatics (they would not necessarily be wrong about this assessment). The on-going jokes, sight gags, chippy dialogue and the assembly line of noted cameos — Jon Hamm, Stella McCartney, Chris Colfer, Gwendoline Christie, Jerry Hall, Suki Waterhouse, Jean-Paul Gaultier, Joan Collins, Bruno Tonioli, Dawn French, Graham Norton, Rebel Wilson, Alex Jones, among others — throughout Absolutely Fabulous: The Movie may be perceived as a stretched-out, tired gimmick. Actually, this “reunion” of sorts is a refreshing throwback for the “AbFab” diehards that viewed the devilishly free-wheeling Edina and Patsy as liberating and truthful broken women in all their comical debauchery.

Thankfully, both Saunders and Lumley have not lost a step in portraying their characters’ juicy narcissism, self-indulgence and sense of entitlement. In fact, Absolutely Fabulous: The Movie and its television blueprint from yesteryear serve up an unassuming commentary about aging womanhood and its vulnerability in a progressive, young-minded world. In a global society that visually and psychologically recognizes youth culture and external beauty, the raucous tendencies of Edina and Patsy are quite understandable as their detestable tendencies are a way of numbing the unacceptable realities they’re experiencing as older women.

This underlying theme allows “AbFab” sycophants (casual or hardcore) to boast that their cherished drinking damsels Edina Monsoon and Patsy Stone are more naturally engaging and stimulating in the satirical cinematic setting of fashion than say the two mediocre movie outings of “Zoolander” and “Zoolander 2” featuring the forced buffoonery and insufferable mugging of Ben Stiller’s Derek Zoolander. 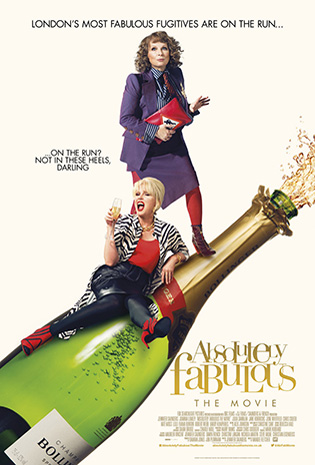