As The Mind’s Eye begins, white lettering on a black screen informs us that in the 1980s, federal funding was approved for private research facilities to study psychokinetic individuals, bringing them to their full potential. As expected, when held against their will in these facilities, those possessed with these abilities revolted against their captors.

Next in November of 1990, a police cruiser comes upon a solitary man walking down a snowy road. They antagonize him, and the man’s stress blows out the car’s windows and windshield and hurls a police officer against the vehicle. Later, at the precinct, the man, Zack Connors (Graham Skipper, “Dementia”), sits in an interrogation room with a sack over his head, which prevents him from lashing out again. He is greeted by Dr. Michael Slovak (John Speredakos, “The Innkeepers”) who invites Zack to his research facility to help Zack subdue his abilities and be reunited with his friend, Rachel Meadows (Lauren Ashley Carter, “Premium Rush”), who is already working with Slovak. Unfortunately, Zack is lied to, and he quickly discovers that the good doctor has no intention of bringing him and Rachel together or to truly help him control his powers . . .

With The Mind’s Eye writer/director Joe Begos (who also produces and acts as cinematographer on this film) delivers a “Scanners”-throwback in his simple story of a man trying to mind (pun intended) his own business. Zack is an individual with extraordinary abilities, yet the story presents him not as an out-of-control threat, but as a man whose troubled past haunts him. Skipper’s performance brings us a bone-weary man who is not the enemy — he is a man who just wants to be left alone.

Grainy closed-circuit feeds, however, reveal small rooms in which Zack and Rachel are not left alone, but instead pushed to their limits to show off their abilities while being fed empty promises that will never be fulfilled. Very quickly, Speredakos’ Dr. Slovak becomes a maniacal madman caught in the throes of obtaining newly-acquired powers, and his obsession grows exponentially, despite repeated warnings from his nursing staff. Speredakos (who bares an uncanny resemblance to Nick Sandow of “Orange is the New Black”) epitomizes the maniacal scientist trope, while attempting — somewhat unsuccessfully — to channel classic horror villains such as Freddy Krueger in his dry wit and Jason Voorhees in his resistance to death.

The story plods along, as there is little focus on anything that doesn’t get us closer to the climactic confrontations at the end of the film. There are some instances of forced exposition (including one particular plot hole regarding the fate of driver whose car Zack steals), but this isn’t a movie worth watching for depth of storyline. The camera framing and composition is carefully crafted, and the production design lends some excellent atmosphere to some tense scenework, but the psychokinetic battles are obviously the draw for a film such as The Mind’s Eye, and they definitely do not disappoint. The special and makeup effects created by Pete Gerner, Brian Spears, and Ashley K. Thomas are the real stars of the show; they are gruesome, engaging, and realistic, and more than once, you will be pushed to delighted outbursts resulting from brutal psychokinetic attacks on a variety of bad guys.

Despite an ultimate resolution that feels slightly interminable (with more than a little overuse of slow-motion editing), The Mind’s Eye is a fun action-science fiction movie for when you’re feeling nostalgic for the days when special effects were engrossing, authentic, and weren’t over-developed by a computer. 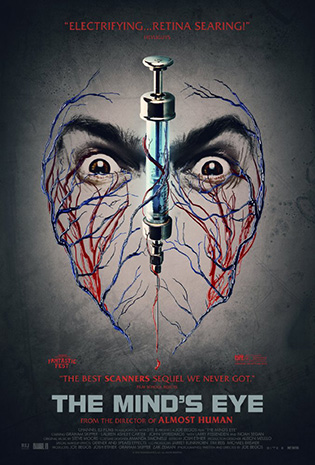