Alice is an unflattering name for a woman. It’s not, however, nearly as bad as Claire is. For me, Claire conjures up an image of a sad, homely girl whiling away the hours, in a rocker, crocheting a sweater. It is, therefore, a fitting name then for the boy-haircut having, wearing the same dull clothes every day, ghost hunting protagonist in Ti West’s “scarefest” The Innkeepers (even though she doesn’t do any needlepoint).

What’s not so fitting, thanks in part to her name and plain looks (can also add how damn annoying she is), is she is also one of the creepier things going on in this haunted house / ghost story picture. That’s assuming, of course, we call this a ghost story, because in all honesty, there isn’t much of a story — paranormal or otherwise — to The Innkeepers.

It takes place exclusively at The Yankee Pedlar, an old hotel that’s shuttering its doors due to a lack of patronage. A skeleton crew, consisting of the aforementioned Claire (Sara Paxton) and her equally home-bodied friend and lover of haunted things, Luke (Pat Healy), are left to tend to the last remaining guests. Their time is spent mostly chitchatting about nonsensicals, forgetting to give guests towels (no wonder the place is going out of business) and critiquing his paranormal website that looks like it was generated in the 1980s, animated ghost and all.

One of the reasons they’ve taken the job, is because there is some gruesome history to the establishment — supposedly Madeline O’Malley, a woman who was left at the altar on her wedding day, checked in many years ago and checked out via a hangman’s noose. After a prolonged bout of red-herring gotchas, beyond obvious foreshadowing and jump scares a 14 year-old YouTuber could have dreamt up, we also learn that Madeline can play the piano. Pretty damn well too, I might add. Convinced Madeline is trying to tell her something, Claire seeks advice from the spiritual advisor with a drinking problem, Leanne Rease-Jones (Kelly McGillis, whom I didn’t recognize), who just so happens to be staying the hotel on its last weekend open purely by coincidence. Claire could have asked the mom, who, with her son, was seeking weekend refuge from a husband that takes her for granted, but I doubt Claire would have gotten satisfactory answers.

Come to think of it, though, it doesn’t really matter what those answers would have been or who supplied them, since Claire doesn’t listen. Instead, she and Luke armed with a solitary flashlight and a 1970s voice recorder break “Scream” rule #66: Don’t do the exact thing you were warned not to do.

Cueing to the requisite creepy music and heightening up the tension for this third act are two aspects to The Innkeepers that West gets mostly right. As the bored staff hunt for evidence of the paranormal, the location takes advantage of its claustrophobic spaces — cramped stairwells, hallways — and minimal lighting — flashlights, faulty overhead — to create an ominous atmosphere. It’s not nearly as creepy as say “The Shining,” but the desired effect is met nonetheless.

But what really saves the film from utter disaster has nothing to do with the haunting of the inn (or the lack thereof). It’s the chemistry (or lack thereof) between Claire and Luke that keeps the audience engaged. Sara Paxton and Pat Healy are quite good together. There is a sexual tension between them — he wants to be more than friendly ghost hunters, she is oblivious. Their back and forth through the first half of the movie borders comedic and is representative of goofy relationships I’ve been privy to.

However, a comedy, The Innkeepers is not. Neither is it an unrequited love story. It is supposed to be a thrill inducing horror pic. Too bad, it isn’t that either. Not by a long shot. 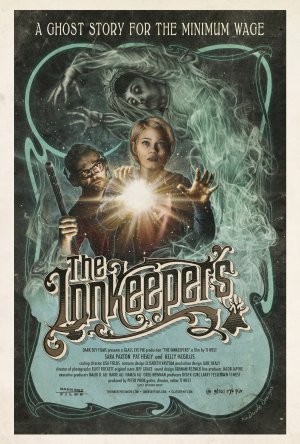