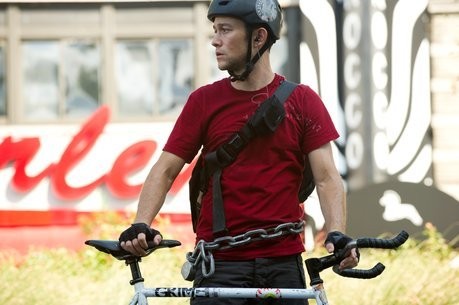 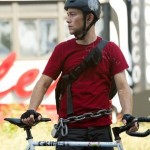 Wilee and his bike.

In a world where we’re used to seeing entire months — sometimes even years — unfold on screen in the space of a couple of hours, you wouldn’t expect a film that takes 90 minutes to show us only 90 minutes worth of action to be particularly exciting. Think again. Director and co-writer David Koepp brings his action screenwriting experience to Premium Rush with no reservations, determined to prove that a bike chase can be just as explosive as any involving cars. Of course, there aren’t any actual explosions, but this is negligible when every risk seems so much more real.

Taking these risks on screen in order for us to have a more immersive vicarious experience of bike riding in Manhattan must be a whole slew of stunt people, but the actors themselves aren’t entirely exempt from these risks, as we see in an end credits shot as Joseph Gordon-Levitt accidentally goes through a cab windshield. But these stunts aren’t their greatest contribution to the film by any means — indeed, the actors make this film what it is. Most notably are the aforementioned Gordon-Levitt as free spirited bike messenger Wilee (think Coyote) and Michael Shannon as crooked cop Bobby Monday, with both actors going much further than the script in giving us believable and yet entertaining characters. Joseph Gordon-Levitt brings his token charm and humor to the screen, taking the monotony out of the standard “everyday guy thrown into a dangerous situation” role. Shannon, however, is truly the highlight of Premium Rush, adding a layer of unhinged desperation to his usual menace to give us an equally hilarious and threatening villain.

Koepp and Kamps’ script is fairly basic, with the plot revolving around Wilee’s delivery of an envelope containing a ticket worth enough money to bring his client Nima’s (Jamie Chung) son over from China. The stakes are high but the job seems simple enough — that is until Monday, a cop who’s gotten himself into a lot of gambling debt, decides he wants the ticket worth $50,000 for himself. With a few more touches such as Wilee’s thrill-seeking philosophy — he rides a fixed gear bike with no brakes — the film seems set to fly by as quickly and easily as any ride. But Koepp should have left some things to the bikes, where the sudden stops forced by open car doors are thrilling, rather than bringing such stop-start action to the film, where the most common (and predictable) of these comes by way of token love interest Vanessa (Dania Ramirez) and her relationship with Wilee’s rival co-worker Manny (Wolé Parks). 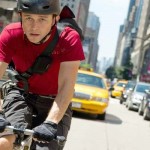 Courier focus is a must.

There are also some plot holes that are never really explained, the most basic of which is why Nima couldn’t simply grab a cab and go deliver the ticket that means more to her than anything. But then there wouldn’t really be much of a film, and we definitely wouldn’t get to see some independent artsy types do some cool tricks. These holes are cleverly masked, however, by the non-linear structure of the film, which begins not far from the end, and zips back piece by piece until we figure out the whole story; so as long as we don’t think too much about it, we’re blissfully unaware. Another neat little trick we’re privy to is the way in which Wilee, with his street smart and years of experience, makes split second decisions on which direction to take to avoid collisions, mostly in the form of joggers and mothers with prams. Time slows down as an arrow plans out for us the possible routes and their risks, settling on a convoluted solution for making it through high traffic with no brakes.

Metaphorical brakes notwithstanding, Premium Rush is nevertheless a fast paced, intelligent film with an unusual topic. It’s not often we come across thrilling action flicks that don’t insult our intelligence in the name of entertainment. There were many avenues Koepp could have taken to throw in some form of poignancy for the sake of it, and while some of Wilee’s lines will make your eyes roll (“The bike wants to go fast”) it doesn’t pretend to be a film of complex substance. If nothing else, it’s certainly proof that a film that isn’t deep doesn’t have to be shallow. 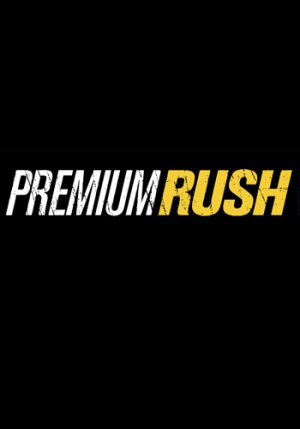