Having already won an Academy Award for his short film “Helium,” director Anders Walter makes a strong feature film debut with I Kill Giants, a reasonably touching, visually captivating adaptation of Joe Kelly’s comic book series of the same name. The story centers around Barbara (Madison Wolfe, “The Conjuring 2”), a tenacious fifth grader who’s determined to save her town from invading giants. It is up to us to question whether these giants are real, and Barbara is simply a hero taking on what no one else will, or whether they are merely an imaginary escape for a young girl dealing with an unknown trauma. The script, also written by Kelly, does a good job of balancing the two sides of her life — one grounded in reality, where she deals with bullies, a persistent guidance counselor and her struggling sister, and the other embracing all things fantastical, where she sets traps for giants and interacts with ghostly harbingers.

We’re introduced to our young protagonist by watching her meticulously check on her traps and gather data, and it’s immediately clear she’s devoted to her self-appointed task. Barbara works hard to keep people out, and it seems to have worked for her thus far, but when new girl Sophia (Sydney Wade, “Una”) arrives from England hoping to make friends and new school psychologist Mrs. Mollé (Zoe Saldana, “Guardians of the Galaxy Vol. 2”) takes a keen interest in Barbara’s well being, it becomes much harder for her to keep everyone at arm’s length. As both of them, along with her sister Karen (Imogen Poots, “That Awkward Moment”), wear away at her tough exterior, we see that under Barbara’s giant-slaying bravery lies a vulnerable kid who just doesn’t know how to cope with the events of her life.

Unfortunately, it’s exactly as these events are finally revealed that I Kill Giants begins to slide into predictable territory. The first three quarters of the film are spent gently hinting at what might be going on in Barbara’s life, which only serves to make the dramatic final act even more noticeably heavy-handed in comparison. The ambiguity that originally made the film so compelling suddenly disappears, and while there’s nothing wrong with giving the audience some answers, Walter displays a lack of trust in our ability to understand a fairly simple moral. Instead, we’re told — repeatedly — what the lesson is, and it’s disappointing to see an otherwise poignant script end in clumsily inserted platitudes.

Despite the shaky ending, there are a lot of things to like about I Kill Giants. Saldana, Poots and Wade all provide absolutely wonderful performances, and Madison Wolfe in particular is truly great to watch as she tackles some complex underlying emotions. It’s also delightfully refreshing to see a tale of adventure and fantasy with not only a female protagonist, but also an overwhelmingly female cast. It would have been nice to see a little more depth to the other women, who are currently somewhat two-dimensional — not only because both Saldana and Poots are decidedly underused, but because the interactions Barbara has with each of them is the emotional core of this film.

Set in a quaint coastal town, the scenery is both beautiful and just mysterious enough for such a mythical story. Walter captures this perfectly, making the entire movie visually rich despite a low budget, which is most visible with regards to the CGI but still doesn’t detract from the stunning cinematography. The score is also remarkable, drawing us further into Barbara’s world while skillfully avoiding overt sensationalism. I Kill Giants is a well composed debut that unfortunately fails to provide the full range of depth one would expect from the premise. Regardless, it is worth watching, and will undeniably bring a gentle warmth to the hearts of anyone who knows what it’s like to have been the odd kid at school. 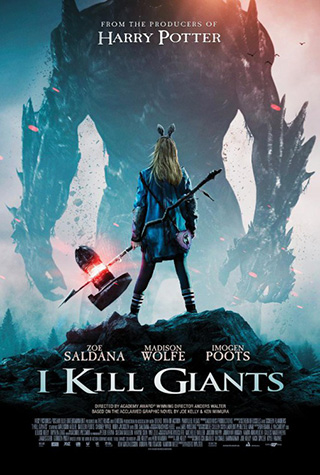