Nature documentaries have recently come into a league of their own. With a combination of incredible new technology and scientific research, they are more able than ever to present us with the marvels of the natural world — and consequently, confront us with the realities of our environmental impact on these marvels. In this landscape, Wonders of the Sea feels less like a stunning theatrical documentary and more like a quaint film that would be projected on loop at your local aquarium. This isn’t to say that the visuals aren’t stunning, but rather that with no real sense of direction or focus, the film falls inevitably into a category of old-world documentary making that will have difficulty competing with the likes of “Blue Planet” and “Chasing Coral.”

Co-directed by Jean-Michel Cousteau, son of the legendary ocean explorer and filmmaker Jacques Cousteau, a love of all marine life is palpable throughout Wonders of the Sea. As we are told early on by his son, Fabien Cousteau, we protect what we love. In that vein, the film does its best to convey just how wonderful and important all aspects of the ocean are, emphasizing the importance of the tiny species inhabiting coral reefs as much as the more typically appreciated dolphins and sharks. This is undoubtedly the documentary’s biggest strength — it’s not often we are shown just how amazing the Christmas tree worm is, or how important the relationship is between clownfish and anemone. By taking the time to teach us the value of even the tiniest organisms, Cousteau and co-director Jean-Jacques Mantello allow us to experience wonders of the sea that we had never before even considered.

Wonders of the Sea follows Cousteau and his two children, Fabien and Celine, on a diving tour of the world, stopping in various exotic locations to give us a taste of the life that awaits us underwater. From capturing a squid mating frenzy to the ways in which ocean life re-purposes a wreckage, no element of marine life seems too big or too small for this film. A particularly gorgeous sequence from a night dive presents us with a direct comparison of the life aquatic to space — and reminds us of how much more we know about certain areas of space than we do about our own ocean floors. A short but informative section on the octopus inspires awe at just how intelligent and spectacular these creatures are. A series of chillingly desolate shots towards the end displays the effects of pollution and climate change on what was once a thriving coral reef.

It’s a noble goal, to be sure, to attempt to persuade an audience to fall in love with the ocean and resolve to save it; the question that remains after the film is over, though, is how exactly does it propose we do that? Narrated by the Cousteau family along with Arnold Schwarzenegger (“Killing Gunther”), the film spends a lot of time on superfluous details and not enough on what actions it actually envisions for the audience — and the world — moving forward. The script briefly mentions sustainability and conservation at points, but seems unclear on how exactly it hopes to achieve these goals. What’s more, it shoe-horns in an unnecessary amount of awkward banter between its narrators, and Cousteau himself often comes across as an older figure trying to entertain a group of small children through invented “mysteries” and corny jokes. Schwarzenegger himself makes a brief appearance in the prologue, but is then relegated to a role of “ooh-ing and ahh-ing,” along with one coerced Terminator reference. Indeed, at any moment the narration isn’t purely informative, it is better off ignored.

Wonders of the Sea is by no means unwatchable: Its use of cutting-edge technology to capture truly spectacular moments is commendable, and it has an important and valuable purpose at its heart. What it lacks in style it makes up for with sincerity, and despite a relatively short run-time of 82 minutes it covers a thoroughly fascinating breadth of ocean life. It has an interesting — if somewhat conspicuous at times — soundtrack, and the cinematography (by Gavin McKinney) is perfectly designed around its subject matter. Its biggest unfortunate failing lies in the fact that it doesn’t do much to achieve its primary goal: Get people to actually act to save the ocean. 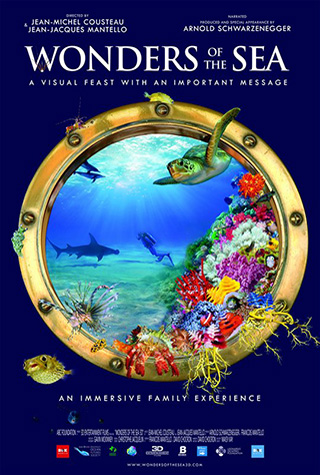