“Fuck your TV. I’ve got my T-Rex.”
“It’s OK in the swamp, especially if you’re the number one toad.”

Leto, written and directed by Kirill Serebrennikov (“The Student”), has received much buzz because of the director’s house arrest — apparently because he is no friend of Vladimir Putin. It has also been criticized for not capturing the true spirit of the 1980s revolutionary rock and roll scene in the USSR, which it is supposed to depict. Finally, the portrayals of its main protagonists, Victor Choi (Teo Yoo, “The Moment”) and Mike Naumenko (Roman Bilyk), leaders of the musical protest against the ossifying Soviet government, have been viewed as imprecise. Some of this criticism might be valid if Leto was a biopic, but it’s not. Get over it.

For anyone seeking a film that captures a particular time and place in rock history, specifically the embryonic Russian rock scene that was emanating from the growing embers of Soviet Russia that began in the early 1980s, you won’t find it in Kirill Serebrennikov’s film. Leto is an artistic re-imagining of the Russian rockers associated with the Leningrad Rock Club, a venue that was given ideological approval by Soviet officials in the hopes that it would provide youth with a healthy creative outlet. However, lyrics must be approved by committee, and the audience may be enthusiastic, but polite, in order to discourage decadent displays of emotion. Under such strictures, what self-respecting rock musician or fan could feel as though they possessed even a modicum of freedom that their Western counterparts enjoy?

Choi and Naumenko are at the forefront of a bunch of young Russian souls trying to find their voice in the global rock scene. They are not dilettantes. They’ve given careful study to the history of Western rock from Bob Dylan’s transition from acoustic to electric to New Wave Blondie, with references to and soundtrack music that includes the Talking Heads, Lou Reed, and David Bowie. They possess large collections of LPs that they handle reverentially as they study the tracks. Shot in black and white, the film seems, in part, to be a tip of the hat to early rock films like Dylan’s “Don’t Look Back,” and to depictions of rebellious Brit adolescence as shown in Richard Lester’s “The Knack . . . and How to Get It.” There are even stylistic, oblique references to François Truffaut’s “The 400 Blows” and Lester’s “A Hard Day’s Night.”

Leto is not a film in which a whole lot of plot and story happens. Besides a modest love triangle involving Choi, Naumenko, and Naumenko’s wife, Natalia (Irina Starshenbaum, “Attraction”), most of the film is composed of a series of vignettes that range from naturalistic rap sessions about the nature of music among musicians, to explosive rock video-inspired sequences. For example, there are scenes where trainloads or busloads of passengers break out into spontaneous song and dance enhanced by hand drawn graphics overlaid onto the celluloid. Besides the stylistic mixture these non-narrative sequences create, they are also meant to signal to the audience that the content isn’t biopic material. Rather, the musically overloaded visuals recall early incursions into post-modern filmmaking. Given that the film is set in the 1980s, this technique seems historically appropriate. In these quasi-spontaneous outbursts, we aren’t meant to experience talented rockers at work, but rather unabashed and intense enthusiasm. This is fitting. You can’t expect fine-tuned talent in an art scene that is circumscribed by so many official, ideological strictures.

Leto is an ambitious film. It unabashedly makes use of the French La Nouvelle Vague styles and themes (playful black and white photography, young protagonists bursting with their own constructed ideology and expectations, generational conflict as rock and roll smashes up against society’s party line). The soundtrack is powerful, albeit not elegant, and helps to develop the film’s temporal rhythm. A major strength of the film is that scenes wherein characters interact in naturalistic dialogue are believable and the acting truthful. At the same time, the presentational music scenes serve as eloquent counterpoints. It is rare that a film can thread both genres. In fact, I can’t think of a film about rock that achieves this cinematic alchemy.

There’s the typical proviso at the end of the film about the characters not representing “real people.” In other words, it’s not a documentary, dude! If it inspires audience members to branch out to look into the scene it’s expressionistically depicting, the internet age includes plenty of content to turn to. 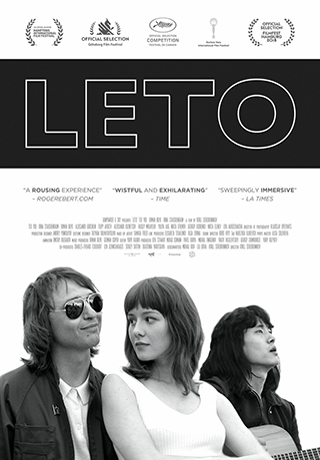