John Madden’s 1998 film “Shakespeare in Love” proposed a secret love affair as being the inspiration behind Shakespeare’s most popular play, “Romeo and Juliet.” The film’s widespread success revealed the public’s longing to find a real human being behind the name of the iconic poet and playwright who composed at least 37 plays, 154 sonnets, and five long narrative poems, but whose life story we know little about. Written by Ben Elton (“Three Summers”), the latest attempt to shed some light on the subject is Kenneth Branagh’s All is True, a film that focuses on the poet’s last years in Stratford-upon-Avon after his premature retirement in 1613. While it is a work of speculative fiction, by borrowing the mysterious alternative title of Shakespeare’s “Henry VIII,” Branagh implies (perhaps tongue-in-cheek) that the film reflects true events.

All Is True opens as Shakespeare (Branagh, “Murder on the Orient Express”), vowing to never write again after the Globe Theater burned to the ground in 1613, returns to his Stratford home after an absence of 21 years. From the outset, the feeling tone is one of wistful sadness enhanced by shots by cinematographer Zac Nicholson (“The Death of Stalin”) of autumn leaves drifting slowly to the ground. One almost expects to hear Frank Sinatra in the background singing “September Song.” Taking a page from his most famous play “Hamlet,” William is visited on his arrival by the ghost of his son Hamnet (Sam Ellis), who died at the age of 11 and who offers his father some of his poems to read. Saddled with a prosthetic nose and hairline, Branagh resembles a figure being geared for display at Madame Tussauds Wax Museum.

Though historically not in evidence, Shakespeare is shown being welcomed by the townsfolk with a reverence usually reserved for the Archbishop of Canterbury. He is greeted coldly, however, by his wife Anne, played by the great Judi Dench (“Victoria and Abdul”) and his daughter Judith (Kathryn Wilder), but with slightly less chill by daughter Susannah (Lydia Wilson, “Star Trek Beyond”). Accused by his wife of not mourning Hamnet at the time of his death, William insists that he did mourn Hamnet but Anne retorts, twisting the knife, “You mourn him now. At the time you wrote ‘Merry Wives of Windsor’” (a farcical comedy). Judith’s resentment is said to stem from her belief that her father thinks that “the wrong twin died,” while Susanna cannot help but notice William’s disdain for her marriage to local physician John Hall (Hadley Fraser, “The Legend of Tarzan”), a man of strict Puritan leanings.

Tormented by the death of his son whom he believed was a promising poet whose writing showed “wit and mischief,” the film proceeds episodically through William’s lonely planting of a garden in Hamnet’s memory, his strained relationship with his wife Anne, and his conflicts with his two daughters. Shakespeare emphatically tells his younger daughter Judith that she should marry and provide him with a male heir. Though he rages that his talent made the family very wealthy and was not appreciated, he later begins to understand the price they paid for his genius. One of the film’s high points is the exchange during an unlikely visit to Stratford by the prettified 3rd Earl of Southampton, played by the forty-years-too-old Ian McKellen (“Mr. Holmes”).

The Earl brings up his identity as the “fair youth” of Shakespeare’s Sonnets, pointing out that “it was only flattery, of course,” to which the Bard responds, “Except, I spoke from deep within my heart.” “But I was so young and pretty, then,” Southampton responds. When they take turns in reciting Shakespeare’s immortal Sonnet 29, asserting the great author’s tender feeling towards the Earl, we at last get a glimpse of Shakespeare’s true greatness. While the film has considerable pleasures including striking performances by Dench and Branagh, basically, All is True exists primarily as a vehicle to promote the traditional view of Shakespeare’s authorship, now coming under attack from various quarters, most prominently from the growing interest in other candidates.

Contrary to its perceived intention, however, the film is neither edifying nor convincing in its attempt to put a human face on a cipher who lacks history, personality, or indeed any semblance of a biography, and whose life story, as it has come down to us, has no connection to the many-faceted genius revealed in the plays and poems. Ignoring the fact that Shakespeare was a tax evader, money lender, profiteer, and grain hoarder, Branagh and Elton envision Shakespeare as a genius capable of any literary feat imaginable. In one scene, an aspiring writer asks the Bard how he accomplished what he did without any schooling past the age of 14, without traveling outside of England, or having ready access to the immense learning evident in the plays.

The answer is right out of the Stratfordian playbook of miracles, “What I know . . . I have imagined,” he says, asking us to accept that Shakespeare’s knowledge of philosophy and astronomy, theology and the law, foreign languages, music, medicine, and court intrigue all came from his vivid imagination. In its attempt to make the implausible plausible, however, Branagh dumbs Shakespeare down enough to persuade us that he is just a “storyteller,” an ordinary fellow after all, with domestic problems just like the rest of us. At one point, William proclaims with un-Shakespeare-like banality, “I’ve lived so long in imaginary worlds, I think I’ve lost sight of what is real.” We might also say that is true of the traditional Shakespeare biography. 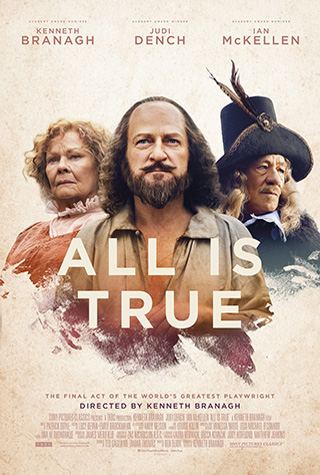