Based “mostly” on a true story (in other words, fictional), Stephen Frears’ (“Florence Foster Jenkins”) Victoria and Abdul is an ode to the warmth of simple friendship and the wonders of British colonialism. Based on the book by Shrabani Basu with a screenplay by Lee Hall (“War Horse”), it is an engaging film about the aging Queen Victoria (Judi Dench, “The Second Best Exotic Marigold Hotel”) who develops a long-lasting friendship with Abdul Karim (Ali Fazal, “Furious 7”), a young clerk who is brought to England from Agra, India to present a gift of a gold coin (“mohur”) to her majesty on the occasion of her fiftieth anniversary as Queen.

Presumably because he is tall, but maybe because he is also dark and handsome, Abdul is selected for the honor together with another Indian, his cousin Mohammed (Adeel Akhtar, “The Big Sick”). Unlike the smiling and gracious Abdul, however, Mohammed is not fond of the British and does not hesitate to say so, referring to them as barbarians and complaining about the weather. When they arrive at court, Abdul and Mohammed are given royal costumes and instructions befitting their station in life. They are told to stand still, never look at the Queen and, when finished with the presentation, walk backwards, presumably into the sunset.

The preparation for the banquet at Windsor Castle is done with a ridiculous overabundance of servility but not without humor as the page boy (Benjamin Haigh, “The Conjuring 2”) runs hysterically through the castle screaming messages about the next action to be taken. After presenting the coin, however, Abdul disobeys all three of the protocols, looking the monarch right in the eyes and bowing down to kiss her feet, an activity that does not sit well with Mohammed who accuses his cousin, perhaps not entirely inappropriately, of being an “Uncle Tom.”

Looking old and listless at the beginning of the banquet, the monarch is very responsive to the charming young man from India and they develop an unexpected friendship that will last until the Queen’s death fourteen years later. In Abdul, she finds the warmth, honesty, and companionship that no one else in her life has been able to provide since the death of her husband Albert. Although Victoria is Empress of India, it is a country she has never visited because of an edict against her by the leader of India’s Muslims and Abdul is asked to teach her about his country, its language, and religion. When he tells her about India’s famous Taj Mahal, the Koran, the delights of India’s cuisine, and teaches her the Urdu language, she calls him her Munshi, (spiritual teacher).

Their growing relationship, however, draws the ire of the aristocratic chaps at court who are portrayed as opportunists and racists who cringe at the idea of a dark-skinned Indian servant being treated so royally (no pun intended). With the threat of their own influence being diminished, the palace revolutionaries hold clandestine meetings to plan a mutiny and even threaten to declare the Queen insane. These conspirators include Lord Salisbury, the Prime Minister (Michael Gambon, “Kingsman: The Golden Circle”), Victoria’s private secretary Sir Henry Ponsonby (the late Tim Pigott-Smith, “Jupiter Ascending”), and the Queen’s son and Prince of Wales, Bertie (Eddie Izzard, “Whisky Galore!”), the future said to be charming King Edward VII, unrecognizable here as surly and rigid.

There are also rebellious if not revolting ladies such as Baroness Churchill (Olivia Williams, “Seventh Son”) and Miss Phipps (Fenella Woolgar, “Mr. Turner”). On hearing of the plot, Victoria comes before them to say that if they have anything to say, they should say it to her face. All is quiet on the Windsor front, however. Victoria’s relationship with Abdul is not all full of mango chutney, however. His saint-like persona is tarnished when the Queen finds out that he is married and has lied to her about Muslim participation in the 1857 Indian Mutiny against British rule. Still, she rejects the racist views of her staff, forgives him, and even brings his wife and mother-in-law to England.

Undeterred by the palace intrigue, Abdul moves out of the servant’s quarters into more luxurious surroundings and becomes the Queen’s personal footman. In a lovely scene, beautifully captured by cinematographer Danny Cohen (“The Danish Girl”), they travel together to her gorgeous Scottish estate at Balmoral where she opens up to her friend about how lonely her life had become. Judi Dench is wonderful in her reprieve of her Oscar-nominated performance as Queen Victoria in “Mrs. Brown” twenty years earlier. She succeeds in providing a sympathetic and human portrait of the monarch in her later years and we respond to her honest need for affection. The fact that Frears also makes clear the toxic nature of racism and of British colonial arrogance is enough to make Victoria and Abdul a film to savor.

'Movie Review: Victoria and Abdul (2017)' has no comments 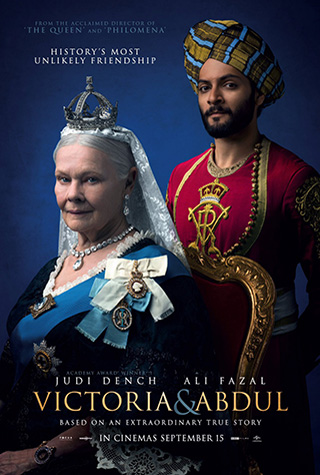