Once upon a time, back in the Light Ages of Hollywood genre filmmaking (aka the 80s), the ancient fantasy picture was a thing of popular beauty. They weren’t all classics, but the memorable likes of “Conan the Barbarian,” “The Beastmaster,” “Willow,” “The Princess Bride,” “Legend,” “The Neverending Story,” “Dragonslayer,” “The Last Unicorn,” and “The Dark Crystal” all helped make that decade the definitive period of cinematic sword and sorcery adventures. The fantasy genre has been in the Dark Ages for a while now, though (unless it’s directed by Peter Jackson and adapted from a Tolkien novel), and if the long-delayed Seventh Son has anything to say about it, that’s likely where the genre is going to stay.

That’s because Seventh Son is, well, Seventh Son. Shot in early 2012, the movie was originally slated for release in February 2013, two years prior to its real eventual release. Extra post-production costs pushed the pic back and production company Legendary Pictures terminating their relationship with originally planned distributor Warner Bros. led to Legendary’s new partner Universal Studios taking over distribution rights. Universal decided it would be fun to delay the movie some more and then, in an odd eleventh hour move, suddenly shell out a bunch of cash for a questionable 3D conversion, an IMAX up-scaling conversion, and even a very pricey Super Bowl spot on the eve of the movie’s actual release.

So, uh, yeah. Clearly, this was always destined for greatness. The result of this mess is like the cliché version of a Russian nesting doll. There’s one big container of clichés that, when removed as the movie progresses, reveals another container of clichés. Inside that one? You guessed it, more clichés. It’s the kind of thing that seems begging for an Alan Smithee credit on the script, because who would want to be associated with penning such recycled claptrap? Well, apparently writers Charles Leavitt and Steven Knight, that’s who. Add Matt Greenberg, too, since he gets a “screen story” credit for having a hand in adapting Joseph Delaney’s novel The Spook’s Apprentice. To be fair, there are some fun ideas here and a decent line or two, even if they’re sandwiched between two slabs of predictable cheese at all times.

The story revolves around grumbly old witch hunter Gregory (Jeff Bridges, “The Giver”), who long ago left lover-turned-monster Mother Malkin (Julianne Moore, “Still Alice”) to rot in a pit in some pretty mountainous countryside. The villainess remained there for many years according to some hokey, though entertaining CGI-heavy time-lapse photography, until she powers up with the arrival of the blood moon and bursts out of her prison to take revenge and just generally kill a lot of anti-witch people.

This puts Gregory in a bind and before long, he’s off to find a new apprentice with hopes that farmboy Tom (Ben Barnes, “The Chronicles of Narnia: The Voyage of the Dawn Treader”), the titular seventh son of the seventh son, will prove the key to defeating Malkin. Lots of silly notions of destiny and a couple twists and a magic amulet are all introduced as a result of Tom’s inclusion, so it’s made immediately clear that director Sergey Bodrov is eager to squeeze as many silly tropes into this adventure as its aged frame can hold.

Various monsters are encountered along Gregory and Tom’s journey to reach Mother Malkin’s lair. A training montage and a pretty girl branded as a witch (Alicia Vikander, “Testament of Youth”) are also slotted in at the appropriate points so that the movie never gets so much as a whiff of fresh air. With so many familiar pieces in play, at least Seventh Son introduces as many good witches as it does bad ones. Generally, when witches are the villains in fantasy movies, they’re all painted with the same broad brush, but here it’s made clear that some witches are decent people, while others are less than decent. There are even suggestions that Malkin was a good witch once, although the movie does little with such hazy gray area.

Sometimes, the heavy reliance on clichés is worth a hearty chuckle, such as when Gregory and Tom are pursued by some large troll-like creature and the humans escape by leaping off a cliff into a body of water far below. When Tom ends up in an underwater scuffle with the determined troll thing, the pair start moving through the increasingly rushing water to the one thing every action movie with a rushing water scene needs: A waterfall. It’s as though Bodrov wants to curry favor by letting us predict every next move and then having us pat ourselves on the back for good guessing.

Other times, the use of clichés goes so far past comically stupid that it circles back to just being plain horrible. As if the movie needed to tick any more boxes on the checklist of crap we’ve all seen thousands of times before, Tom even has a vision where he’s visited by his mother (Olivia Williams, “Anna Karenina”), a woman who speaks almost entirely in one-liners thieved from a Cracker Jack box and now gives him bon mots of wisdom about how he has it in him to pull this off and he needs to believe and blah blah blah.

Like most parts in the movie, Williams’ role is a thankless one, but at least some of the actors make the most of it. Moore at least seems to be having fun, though her Mother Malkin is stuck with such uninspired cutaway scenes that she never quite succeeds as the deliciously evil antagonist the movie could so obviously use. Ben Barnes isn’t great, but he has a little bit of charisma, which is certainly better than none. And then there’s Bridges, who looks like a medieval-era Colonel Sanders and sounds like he bit his tongue off during his last meal. He’s simultaneously the best and worst thing in the movie, a laughable performance that’s also somehow kind of wonderful. Vikander is forgettable, as is Antje Traue, who was very memorable a short while ago as the nasty Kryptonian villainess in “Man of Steel,” but neither performance here is so much the fault of the actress as it is a testament to the blandness of the script.

Outside that script, though, there are some big names behind this movie. Bodrov may be new to Hollywood (or he was when the movie was shot so many years ago), but cinematographer Newton Thomas Sigel has been shooting blockbusters for quite a while, amassing impressive credits such as “X-Men” and “Superman Returns.” Sigel shoots Seventh Son in a nostal soft focus style that would be pleasant enough to look at if it didn’t so epically clash with the 3D conversion, which usually requires crisper visuals. Production designer Dante Ferretti (a three-time Oscar winner for “The Aviator,” “Sweeney Todd,” and “Hugo”) has his name in the main end credits, too, but the work here is quite obviously far from his best. And even the somewhat shoddy CGI is largely credited (in terms of design) to visual effects legend John Dykstra, whose work dates back to the 70s, most famously with “Star Wars.”

That’s a lot of grade-A talent working on a sub-par movie, but the question marks that arise from such oddness are just part of the fun that is the strange existence of this thing. Seventh Son isn’t really an example of a so bad it’s good movie and yet it’s not quite so bad it’s bad, either. It’s something of a hybrid of the two. So bad it’s gad? The tumultuous trek it took to theatrical release puts the movie in that embarrassing spot where one can’t help but fear the worst, so when seen, it’s not necessarily the worst, but so dunderheaded and dopey that you can’t help but feel that the movie itself thinks it’s the worst. Something with such low self-esteem is a little tough to beat up on, plus nothing can be all bad when it gives us Bridges doing whatever he’s actually doing here.

There won’t likely be any sequels to this mess, so we’ve almost certainly been robbed of the great title that would be “Seventh Son Seven.” We won’t even get “Seventh Son Six.” That’s probably all for the best, though. Hollywood is capable of doing fantasy cinema much better than this, if only they can remember how. For now, any hunger for old-fashioned fantastical adventures will have to be lightly sated by this somewhat stinky block of cheese. Swallow with care, though, and don’t choke on the clichés. 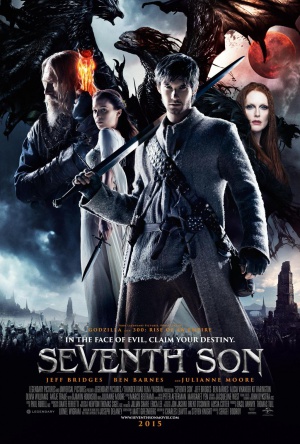