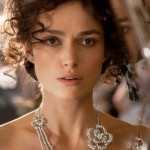 Joe Wright should win the award for most courageous director of the year. The majority of Anna Karenina is filmed in a theater with all of the sets built on and around a main stage including a skating rink, a grassy field, a snowy train station, and even a horse race. It is not claustrophobic, but it can get a bit dizzy. The camera frequently spins around in a circle to clear off the previous set and introduce a new locale.

Considering that the source material is a very long and deep work of 19th century Russian literature, the film’s pace is throttled full speed ahead. It is not quite frenetic, but it is noticeably fast in order to condense a considerable amount of story into a little over two hours. Baz Luhrmann’s “Moulin Rouge!” immediately jumps to mind. It does not sprint as fast as “Moulin Rouge!” did in its first half hour, but it is not lapped by it either. Also, the atmosphere (in the first half of the film) is deliberately light and comic. The choreographed movement approaches farce at times which is most unexpected considering the main themes of Anna Karenina are adultery, hypocrisy, lust, and love.

Anna (Keira Knightley) and her senior statesman husband Aleksei Karenin (Jude Law) live extremely comfortable lives in the upper crust of St. Petersburg society. In overt foreshadowing of events to come, Anna takes off for Moscow to repair her brother, Count Oblonsky’s, (Matthew Macfadyen) marriage to Dolly (Kelly Macdonald) due to his frequent infidelities. She urges Dolly to forgive and forget; why rock the boat? If she does not forgive Oblonsky, then there will surely be a divorce, scandal, the loss of position, and what could truly be worse than that? Well, Count Vronsky (Aaron Taylor-Johnson) is about to show Anna just how low she is willing to travel all in the name of true, romantic love.

Karenin is 20 years Anna’s senior but he has an impeccable character, deep honor, is a good father and husband, and is regarded as saintly by his peers. He is about to become the patron saint of cuckolds quite soon. Vronsky embodies most of the characteristics which Karenin lacks. He is a womanizer, has loose morals, and emerges as a fop, a dandy, a mere boy compared to Anna. He is a gnat buzzing around her perfectly coiffed hair yet for reasons neither we nor Anna understands, she cannot take her eyes off of him. Vronsky is expected to propose to Dolly’s younger sister Kitty (Alicia Vikander) but all of those emotions vaporize in an instant when Vronsky lays eyes on Anna.

It is the chemistry and emotion between Anna and Vronsky where Anna Karenina falls flat and makes you yearn for the much more powerful love triangle of “Moulin Rouge!.” The audience feels the passion between Ewan McGregor and Nicole Kidman, the penniless writer and the courtesan who are repeatedly torn apart by the evil duke. Never once will the audience here understand the decisions Anna makes regarding Vronsky. He is a blatant cad and nuisance threatening the very essence of Anna’s social status and ultimately health as he successfully tears her away from her husband who views the whole affair a slight against the almighty himself. 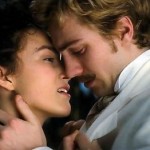 Joe Wright also chose to cast British and Scottish actors and have them use their native accents. None of the leads are Russian and there are no Russian accents. I wonder if native Russians will feel that one of their sacred texts has been transformed into British soap opera. The light and festive atmosphere in the first half of the film works quite well. The pace keeps the audience interested and on their toes to try and keep up with the incessant scene changes and time jumps. The second half naturally slows down as the drama and tension mount and then the final half hour takes a direct nose dive off a cliff. Anna discovers the hypocrisy of Russian society which excludes her yet she does not function very well outside of it. She becomes paranoid and loses all of the grace and charisma her character displayed early on which garnered our sympathy for her. Yes, the film dutifully follows the novel’s story line, but that does not automatically maker Anna’s character arc a joy to sit through.

The most important part of all of the pieces which must come together to successfully transform one of the most popular and beloved novels of all time to the big screen is the screenplay and the choices the writer makes. Tom Stoppard obviously could not include everything, but he surely gave it his best effort. He almost forces Joe Wright’s hand to move the film along so fast because he chose to keep so much of the original story into this one. Yes, Anna Karenina is one of the most courageous films of the year if not the bravest over all, but it is not one of the best. 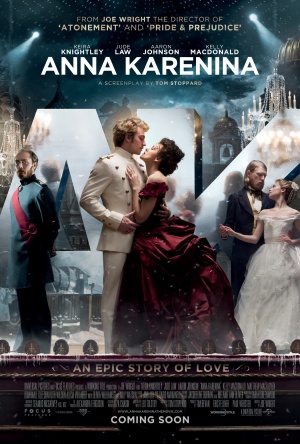