A well-balanced blend of Prohibition-era gangster thriller, western, and vampire movie, Bloodrunners is an intriguing prospect. It’s no game-changer, and it never shakes its TV pilot aesthetic, but it wears its hybrid influences well and betrays a knowing sense of its own absurdity.

It’s 1933 and everyone, from mobsters to cops, are getting tired of Prohibition laws. Detective Jack Malone (Michael McFadden, who also writes) and his partner Sam (Dan McLaughlin) are casing a speakeasy named Chesterfield’s. The Chesterfield of the title is a bruiser of a businessman (played by Ice-T, “Law & Order: Special Victims Unit” TV series), who’s supposed boss is a camp overlord named Victor (Peter Patrikios, “My Super Ex-Girlfriend”). Because they are always called Victor.

Jack suspects shenanigans but he’s struggling to gather the evidence. His way in is through Willie (Chris James Boylan), an innocent bus boy who dreams of stealing Victor’s money and then stealing away with his teen love, Anna (Airen DeLaMater, “Apparition”). Through their naive new contact, the detectives discover that the bottles being shipped by the Chesterfield crew are not filled with booze . . . but blood!

As the body count multiplies and allies fall around him, Jack is forced to team up with some most unlikely fellows — including a loopy priest played with relish by Jack Hoffman (“Assumption of Risk”) — in his bid to knock the real villain, the possibly ancient uber-nemesis Chesterfield, from his perch.

Bloodrunners is a nifty setup, and thankfully none of its genre influences feel too short-changed. The period evocation is just about there, even if some of the costumes look like they’ve just been plucked off the shelf of a party shop, and the jugular-based violence is appropriately sudden and savage. And superpowers are, mercifully, kept to a minimum.

It’s over-plotted, however, but I feel that a little lagginess is an acceptable sacrifice for at least attempting to provide its characters with life and backstory. While the pacing does mean we’ve got a bit of a wait to get to the vampire showdown, when it arrives it satisfies our bloodlust, even if budget restraints render some kills little more than an exercise in sound design. Could we have done with a bit less of the Guy Richie-style speed-up-slow-down fight footage? Maybe, but I guess it hasn’t stopped looking cool quite yet.

An overriding sense of fun gives life to some dialogue which would otherwise be dead in the water. Mamet this ain’t. It’s helped by some creditable performances. McFadden is solid as the hard-boiled detective burning with military guilt, and Kerry McGann (“Twisted Sisters”) brings warmth and depth to Rosie, the matriarch of the local brothel, with whom Jack has had previous relations. The young ‘uns, Boylan and DeLaMater, make for a convincingly tragic pair. Sadly, the bad guys don’t fare so well. While Patrikios delightedly chews the scenery, his henchmen are cookie-cutter. And then there’s Ice-T. He has never been much of an actor, but it doesn’t even look like he’s game for a laugh here.

The lackluster rapper is partly to blame for the disappointing final confrontation, which shamelessly positions itself for a future installment. You’d think this rather fanciful, but with a sixth “Tremors” film in production, stranger things have happened.

Assisted by a classy, evocative score — preferable to the psuedo-symphonic synth we often get at the VOD level — Bloodrunners manages to be a cut above the crowd in this price range. It won’t win any awards (they just missed the bus for the Oscars, unfortunately), but it wins the attention for 99 minutes. Perfectly at home on the small screen, it’s a neat idea packaged in a fast-moving film with a refreshing sense of fun. 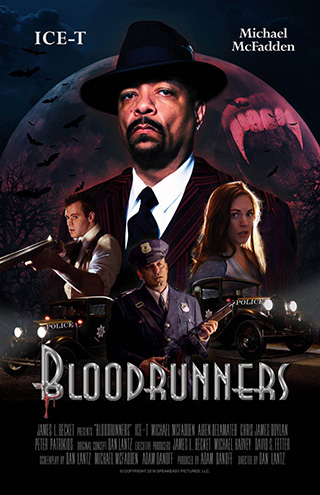