Let’s see — Sunday night, family is asleep and there isn’t anything on the boob tube worth my time. What to do? You guessed it; waste 95 minutes of my time on a spoofy, silly comedy. I figured after a dump truck load of shit has fallen on my head this past week, I could use a ‘no brain needed’ flick to lessen the stress.

Lessen the stress My Super Ex-Girlfriend did. It was original and quite amusing. Uma Thurman portrays Jenny Johnson aka G-Girl, a superhero which for all intents and purposes is Superman with tits. She can fly, shoot fire from her eyes and presumably shit lightning. Luke Wilson, the fucker, is the lucky guy who gets to tap G-Girl’s ass on a daily basis. Lucky that is, until he finds out Ms. Johnson is the girlfriend from hell and takes “Fatal Attraction” to heart.

From the onset, it was clear My Super Ex-Girlfriend wasn’t going to take itself seriously. The plot is extremely simplistic but it flows very well. There aren’t any major lulls in the quasi-action and more importantly the “adult-themed” humor flows even better. It was great to see that a super hero can be a sexual deviant. It was also funny to see Luke Wilson completely baffled as to what to do, when G-Girl refuses to accept the breakup. It was easy to imagine myself in his position — only difference would have been, I would never have stopped fucking her. Uma Thurman has got herself quite the body . . .

The casting of Rainn Wilson as the douchebag best friend was brilliant. Everyone has a friend who thinks they are the top dog, even though everyone around them sees them as the morons they really are. I found Anna Faris rather annoying — her whiny, baby voice sends me through the roof and makes my ears bleed. Also, the character of Professor Bedlam (played by Eddie Izzard), should have been more masculine. I don’t like to see my super-villains appear to be pansies. Even in comedies, they should present an aura of power and dread in some fashion.

That being said, I should think everyone will get a kick out of My Super Ex-Girlfriend. It sure as shit isn’t going to win any Oscars, but it will definately put a smile on your face. And after all, isn’t that what the real purpose of a comedy is all about. The Oscars are for movies no one wants to see. 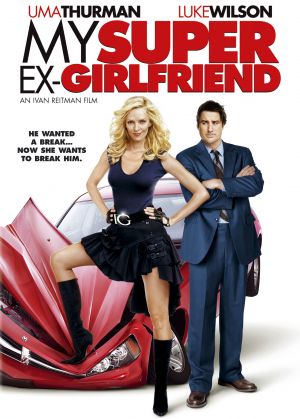