I was 22 years old when “Clerks” hit the local cineplex. It was watching this movie that created the obnoxious man you see today. A man loosely based on Randal Graves (Jeff Anderson), the quick-witted, foul-mouthed asshole and Jay (Jason Mewes), the dim-witted, stoner. So without question, I had to see whether the characters that made me piss my pants with laughter so many years ago still had it in their return to screen in Clerks II. I was not disappointed.

Randal Graves — still a complete and utter dick. Dante Hicks (Brian O’Halloran) — still the frumpy, dorky dude. Jay — still misunderstood. Silent Bob — still silent (mostly). This time around, we find our fearless friends no longer working at the convenience store but in a step up the corporate ladder, now flipping burgers at Moobys (see “Dogma”). Here the verbal barrages are launched by Randal — just like Hezbolah rockets into Haifa; they’re nonstop and lethal! The introduction of Elias (Trevor Fehrman) as the bible thumping, virgin geek is the perfect addition to the ensemble. Watching Randal interact with this poor fucker is comedy genius.

A very pleasant surprise is the casting of Rosario Dawson as Becky. Nothing helps a movie more than having an extremely hot woman starring in it. You’ll love the dance scene on the rooftop (firm breasts bounce, oh so nicely). The little cameos throughout the movie are also done in a subdued manner. Ben Affleck, Kevin Weisman, Jason Lee and Wanda Sykes pop in and add just a little something extra to make a scene work.

The writing is once again top notch. It literally reminds me of sitting at a bar with a few friends – quick talk, insults and wildly outrageous ramblings (I do this too much). This is what true comedy writing is about. Even more pleasing, was the way Kevin Smith intertwines his movies. There are scatterings of “Dogma,” “Mallrats” and “Jay and Silent Bob Strike Back,” that are meant to give a treat to those who follow Smith’s work.

There are several drawbacks, however. Clerks II tries awfully hard to meet the bar of its’ predecessor. It almost tries to be more vulgar and, as an extra treat, more revolting. Clearly not necessary. The other concern, is how long before this franchise loses steam? Smith has been working with these characters for many, many years and there has been a slow, steady decline since. Although this movie has captured most of the original and added a tad of originality, I should hope the characters are laid to rest.

For the utmost enjoyment, I strongly suggest watching the original “Clerks” before viewing this. If that isn’t possible, at least make sure “Clerks” is on the list of movies you’ve got to see prior to your death. 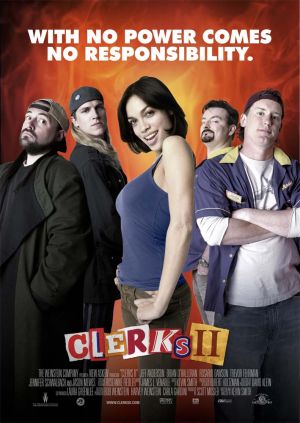