I know how it looks. Ari Aster’s “Hereditary” is just becoming this year’s classy horror breakout hit, and here’s a lousy, straight-to-VOD knock-off with a conspicuously similar title, right? Well, there are no coincidences in marketing, but it turns out that Inheritance is actually a decent psychological thriller: Atmospheric, well-played and well-made, and dead serious. The style and the substance is there; I’m just not convinced by the script sticking it together.

Employing layered editing, and creepy-sympathetic music (by Mini Mansions) recalling Angelo Badalamenti, we get a terrific, slow-burn opening, wherein 30-something Ryan (Chase Joliet, “It Comes at Night”) gets the news that his biological father, Frank (Tim Abell, who somehow isn’t Tom Berenger), has died in a surfing accident, and he’s left him his Californian home.

Ryan and his fiancée Isi (Sara Montez, “#WhenTodayEnds”) travel to the inherited house and find it’s beyond their wildest dreams, not to mention their usual means. Yet everyone, including the realtor Effy (an impactful cameo for Dale Dickey, “Hell or High Water”), seems to be nudging them toward selling. Even Frank is in on the act, posthumously imploring a quick sale via letter.

Slowly — impressively slowly for a modern chiller — Ryan and Isi get to know the locals. It seems there’s a dark history involving settlers “taking” the native girls for some malign purpose. Ryan is having disturbing dreams. His dad, drowned. His dad, slashing his own throat. And who are those guys strangling his mother?

Resentment grows between Ryan and Isi. Communication crumbles. Isi is pregnant and, reasonably enough, wishes for Ryan to show some sense of responsibility. But instead he’s retreating into himself. He was abandoned once, so he is pre-abandoning his own unborn child. Ryan is being pressured from the past (the ghosts of a violent history) and the future (parenthood) — and he’s sliding toward something terrible.

It’s kind of like “The Shining,” only from the perspective of Erik Erikson’s sixth psychosocial stage. And debutant writer-director Tyler Savage, who previously shared a set with Terrence Malick on “To the Wonder,” has remarkable, Kubrickian poise behind the camera. The film’s best scene involves Ryan’s sister and her partner paying a visit. Their dinner party is a consummate example of filmmaking control: A single take, with complex slow zooms and pans, capturing the swelling discomfort, and every subtlety of the performances.

The key problem of Inheritance, though, is a crucial imbalance in the narrative. The ostensible plot, about an initially happy couple moving into a creepy house, and the strain this has on their relationship, is simple to the point of cliché. The backstory, on the other hand, is overstuffed with characters and incidents from different timelines, and presented so vaguely and esoterically that it’s a challenge to grasp with any real certainty.

As a result, we are left clawing for clues as to what the film is really about. At a push one assumes Ryan is resistant to parenthood because of the palpable fear that he will simply be a vessel for some murderous family trait. But is this actually in the film, or am I digging for content because I’m seduced by the style?

Savage’s resistance to exposition is admirable, but the sparseness of the script puts the emphasis almost solely on the occasionally over-stylized visuals, whilst never being satisfyingly scary. It’s a film of build-ups and no money shots. A mystery this stately needs a killer reveal. Inheritance delivers one shock moment, sure, but its impact is softened by the hackneyed twist that goes along with it. (Speaking of hackneyed, the use of the sound of faintly moaning wind to trigger uneasiness is overused here).

The performances are fantastic, however. Joliet nails the bereft gaze of a man whose last opportunity to know his real father has passed: A lost little boy. Drew Powell (“Gotham” TV series) gets an enjoyably grotesque role as Ryan’s “cuz,” Del. But the best performance is Montez’s; and perhaps we could have used fewer lingering shots of Joliet gazing wistfully out to sea and spent more time with his increasingly frustrated fiancée, a woman whose strength doesn’t waver even as her brave face falls.

I wish I loved Inheritance, but I can only say I admire it. Its anxious atmosphere is impressive, and the filmmaking craft is exceptional — even more so when you consider this is a debut. But the storytelling is problematic. While I can see what it’s striving for, ambiguity really can look an awful lot like a plot tying itself in knots. But there’s easily enough here to suggest a truly special sophomore effort. 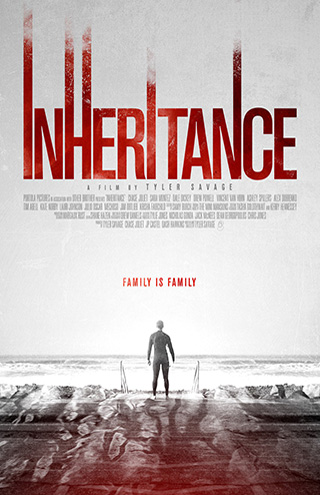