The plot’s familiar but the execution is fresh in this neo-western with a real country soul. Two stubble-muzzled brothers, armed with a pair of pistols and the Law at their heels, tear through the southern tip of America’s Great Plains on a small-town bank-robbing spree.

The script, which won 2012’s Black List, was originally titled “Comancheria,” a Native-American term for the West Texas setting that conjures images of Indians, Cowboys, and ever-stretching prairies to swallow you whole. It’s a shame that the name was changed. Seeing Hell or High Water written on movie posters doesn’t carry the same descriptive focus, although an accompanying image of Jeff Bridges in aviators and a ten-gallon-hat certainly twists the lens.

The film’s screenwriter, Taylor Sheridan, is no stranger to crime in sun-soaked settings. He was a series regular on the opening seasons of FX’s “Son’s of Anarchy” and his debut script “Sicario,” pitting the FBI against the Cartels along the Mexican border, was released in 2014 to great acclaim. This, his second film, sees Scotsman David Mackenzie brought onboard to direct, an interesting choice given his history in romance and comedy. However 2013’s “Starred Up,” a brutal story of a violent young offender accelerated into an adult prison, showed that he can also cover the edgier corners of the narrative scope.

Hell or High Water opens with a clean, simple robbery: Two unknown men, masked all in black, enter a regional office of a local Texan bank at 8:30am. They have guns, but fire no shots, take only small bills, and leave no images on the security cameras. By 9:15am, they’ve hit another branch. Same circumstances. This was clearly well planned.

Their accents and demeanor betray the robbers as locals, but it’s only in the getaway car that their identities are revealed: Brothers Toby (Chris Pine, “Star Trek Beyond”) and Tanner (Ben Foster, “Warcraft”), siblings at opposite ends of the emotional spectrum: Thoughtful and composed vs. manic and wild.

Their motivation for the heists rests on an ethical bedrock: Their recently deceased mother has left dues on an outstanding loan offered at a shamefully poor rate from the same banks that they’re stealing from. If the sum isn’t repaid by the end of the week, the Fat Cats will seize their family ranch: “The bank loaned just enough to keep your momma poor, thought they could swipe her land away.” This financial institution is a silent, shapeless villain.

Tasked with catching the robbers are Texas Rangers Marcus (Jeff Bridges, “True Grit”) and Alberto (Gil Birmingham, “The Lone Ranger”), the former a cantankerous and wily old dog knocking on the door of retirement. After some acerbic mulling, he judges that “these boys know exactly what they’re doing. They’re trying to raise a certain amount.” A lasso begins to spin in Marcus’ mind, “I think I’ve got one hunt left in me,” and the opposing duo set off after their prey, leaving clouds of dust in their wake.

A striking factor with the plot is how there is little new, yet it feels original. It’s a “Cops & Robbers Western 2.0,” updated for a modern audience. Chewing tobacco has been replaced with e-cigarettes, trusty steeds with beat-up getaway cars, and shady gambling dens with Indian Reservation Casinos. It’s fully aware of the genre’s tropes and embraces them, checking-off like a fan’s wish-list: Guns, oil, ranches, cowboys, steaks, whiskey, open-roads, lawmen, Mexicans, Indians, stick-up artists, posses, and, of course, shootouts.

It’s clear to see why the screenplay for Hell or High Water gathered so much attention. The dialogue is pithy, slick, and very quotable. This must have been a big draw for its stars, who all bring strong performances throughout. Jeff Bridges is on familiar turf as the slurry veteran (he’s only an eye-patch and a hangover away from Rooster Cogburn) and Chris Pine inhabits a more melancholic personality than his usual roles to ruminative effect.

However, its Ben Foster that stands out as the real nugget of acting-gold. He depicts a wet-dynamite of a character, perpetually on the cusp of unprecedented ignition. “How have you managed to stay out of prison for a year?” asks Toby, “It’s been difficult.” Foster has gained considerable weight since playing Lance Armstrong in last year’s “The Program,” filling out into the character’s care-free attitude whilst maintaining the crackerjack energy required for such a sporty role. Cameo performances are also fierce, with peripheral actors likely drawn from locals of the surrounding area, giving the community a rounded feeling of authenticity.

British cinematographer Giles Nuttgens does an excellent job with Mackenzie in capturing the open and dusty nature of the state, with many shots worthy of a Marlboro billboard. Indeed it’s an interesting choice to place non-natives behind the camera of this intimately Texan film, but they pull it off with swagger, capturing the feeling of a slow-rolling and largely simple life, rippled by the mayhem of a crime spree.

If anything some of the general sleepiness permeates a little too well, and at moments the tumbleweeds drift out of the screen and into the audiences’ concentration. Soundtrack choices occasionally jar the mood by pulling us out of the moment and back into our seats and some of the transitional scenes behind steering wheels and beer bottles can at times feel like inserted placeholders. Also, it has to be said that the general momentum of the film lulls in the second act, as if the filmmakers have stopped digging in their spurs. Were the audience on horseback, the opening 30 minutes treats us to an energetic canter, only for our mount to slow right down to a trot. Thankfully, it regains its stamina and breaks into a full gallop for the final furlong.

Hell or High Water isn’t breaking new ground and likely won’t win many awards, but it snugly inhabits the space set for itself. It feels like a dusky barbecue in a neighbor’s back garden: Familiar, yet pleasantly different, and with home comforts just a few strides away. It’s right up there with the best Westerns of recent years, and shoots the pants off the rest of this summer’s current box office. Well worth a mosey. 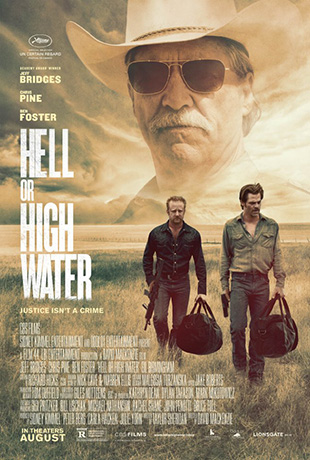