The mission brief to Ghosts of War is simple: Five American soldiers must defend a chateau in 1944 Normandy, that, as luck would have it, is apparently haunted. Sadly, however, this trope-laden plot is the only pillar of stability in an incomprehensible mess of a film, which burns like a ragged bullet-wound to the stomach.

Writer/director Eric Bress (director of 2004’s “The Butterfly Effect” and writer of “The Final Destination” and “Final Destination 2”) introduces a band of identikit soldiers lifted straight out of “Saving Private Ryan.” They are: A wild-eyed sniper (Kyle Gallner, “Welcome to Happiness”), a bookish and bespectacled translator (Skylar Astin, “21 and Over”), a big tough-guy called “Butch” (Alan Ritchson, “Teenage Mutant Ninja Turtles: Out of the Shadows”), a story-telling soldier (Theo Rossi, “When the Bough Breaks”), and a clean-cut all-American captain (Brenton Thwaites, “A Violent Separation”), tortured by some unknown secret. These stale war-genre characters receive orders to guard a familiar horror-genre setting — the spooky mansion full of doll houses, music boxes, creaking floorboards, and the occasional jump scare.

What begins as a bad movie quickly devolves into a complete editorial shamble. Sequences have clearly been inexplicably cut or reordered — characters appear with unexplained facial scratches, only for the injuries to disappear in the subsequent scene, then reappear in the next.

But beyond just being poorly put together on a technical level, the themes of Ghosts of War also manage to be both boring and offensive. It offers a nasty and simplistic view of WWII history, casually introducing bedraggled holocaust survivors with no clear purpose other than a deliberate attempt to score historical points and earn moral capital. Enemy assailants are portrayed as frothing-mouthed foreigners straight out of “Team America,” except without the irony of satire.

Ultimately, the laborious and coincidence-dependent plot to “hold the fort” at all costs against insurmountable (and unseen) odds felt much like the viewing experience — a gargantuan effort to dig in and grit through. A bizarre twist in the third-act does nothing to reset the wrongs of the previous 80 minutes — of a 94-minute runtime — leaving us feeling cheated, confused, and angry.

A cinematic court-martial should be called. Ghosts of War should be sentenced to death by firing squad, leaving its tormented spirit to drift across the ether of streaming platforms, haunting any viewer unfortunate enough to have watched it. 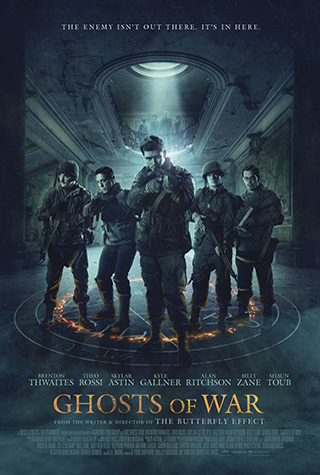