Danny Wolf’s three-part documentary sets itself a tall order. Identify, present and discuss a set of cult films, all the while trying to define what a cult film is and why. For the most part, director Wolf and his co-writers Paul Fishbein and Irv Slifkin succeed in this convoluted and potentially confusing task as, with some reservations, the three-volume work Time Warp: The Greatest Cult Films of All Time delivers an intriguing and entertaining journey through a multitude of films, all grouped under the heading of “cult.”

The selection of films is fascinating. Famous (or should that be infamous?) titles appear such as “Plan 9 From Outer Space,” “Eraserhead,” “Point Break,” “Night of the Living Dead,” “The Evil Dead,” “A Clockwork Orange,” “Blade Runner,” “Fast Times at Ridgemont High,” “Clerks” and “Office Space,” alongside more obscure titles from “Pink Flamingos” to “Liquid Sky,” from older films like “Reefer Madness” and “Freaks” to recent oddities like “The Human Centipede” and “The Room.” What links these films together is no one thing, as evidenced by the titles of the documentary’s three volumes: “Midnight Madness,” “Horror and Sci-Fi,” “Comedy and Camp.”

Across its documentation, Time Warp: The Greatest Cult Films of All Time caters to a great variety of fans. Consumers of particular genres, especially horror and science-fiction, will find themselves well served, but in addition so will connoisseurs of drive-in films and the midnight screenings that form the focus of the first volume. Wolf wisely begins this journey through cult cinema with “The Rocky Horror Picture Show,” a bizarre mishmash of elements by any standards, that has consistently sold out auditoria for decades. From that starting point, Time Warp: The Greatest Cult Films of All Time highlights the unique yet shared features of these varied films, regularly returning to the central question of what makes a cult film?

Whether the film answers that question or not is up for debate. Wolf provides no authorial voice over the proceedings, and instead offers a great many talking heads to offer their views on the topic. Actors including Pam Grier, Gary Busey and Jeffs Bridges and Goldblum (sadly not interviewed together) offer their views on what makes these particular films from their back catalogs cult, while writer-directors such as Kevin Smith, Slava Tsukerman, Amy Heckerling, Tobe Hooper and George A. Romero offer insights into the strange and often strained circumstances of production, often suggesting that this led to cult status. Critics and other figures from the industry such as Irv Slifkin, Amy Nicholson, Joan Graves and Bruce Vilanch offer further responses to the central question as well as discussing wider issues of distribution context, reception and longevity.

These varied voices are the best thing about Time Warp: The Greatest Cult Films of All Time, because they demonstrate that what makes a cult film is hard to pin down. Maybe it’s a film that is not liked by everyone but those who do REALLY like it. Maybe it’s a film that is not good but is cool, to misquote Rob Zombie who offers an interesting take on what audiences engage with. One angle that Wolf explores is longevity — for a cult following to be sustained indicates that a film must remain in the public consciousness over time, sometimes in different regards. The case of “Reefer Madness” is especially interesting here, as Wolf uses this film to highlight the re-appropriation of material by film fans. Originally released in 1932 as a public service announcement in the form of a narrative film, a re-editing in the 1970s turned the film into a cult favorite, this repurposing presented as a form of subversion against different types of authority.

Moments like these are absolute nuggets, demonstrating that perhaps there is a universal feature throughout cult cinema — accidental iconicity. A point that comes up time and time again by the various speakers is that you cannot deliberately make a cult film (although this is also contradicted in reference to “Liquid Sky” and “Eraserhead”). Many of the speakers, and perhaps also the viewer, will find themselves baffled as to why “Re-Animator,” “The Adventures of Buckaroo Banzai” and “Valley Girl” achieved their beloved status, but fans may have an intuitive understanding of what makes these films special.

As well as offering views on what makes a cult film, the people interviewed also have remarkable and often hilarious anecdotes about the productions, as well as affection for their cinematic legacies. Pam Grier and Tobe Hooper describe some of the creative choices made in their careers, and (perhaps unsurprisingly), John Cleese proves a very funny and insightful guest as he describes the process of writing “Monty Python and the Holy Grail” along with the bizarre circumstances of its production (Cleese also makes a great joke at the beginning and end of his segment, which is worth looking out for). Amongst the laughter, there is also sobriety as the documentary pays tribute to those filmmakers who died after completing their interviews, including Tobe Hooper and George A. Romero.

The one false note in the documentary are the hosts. Rather bizarrely, the film repeatedly returns to Joe Dante, Illeana Douglas, John Waters and Kevin Pollack, sitting in tall production-style chairs in what appears to be a film studio. The four hosts contribute little to the discussion beyond occasional insights such as Douglas pointing out the importance of production design in “Napoleon Dynamite” and Dante sometimes letting the viewer know what to expect next. Pollack is almost entirely reactive, though he does have some funny lines such as describing the notorious director Ed Wood as having a “single-minded cluelessness.” Waters provides some interesting anecdotes about his own films such as “Pink Flamingos,” but he could have been simply featured as a talking head like so many others. Four people sitting around to discuss a topic suggests an actual guided discussion, but the sections featuring these four do not fit with the overall structure of the documentary. Thus, the viewer may ask what these four are doing there.

Aside from this minor issue, Time Warp: The Greatest Cult Films of All Time is a delight. From its intriguing and wry look at some of cinema’s oddest outputs to its charming and frank analysis of creators and fans, Danny Wolf’s trilogy conveys warmth and affection for its subject, highlighting the wacky wonders of the weird. 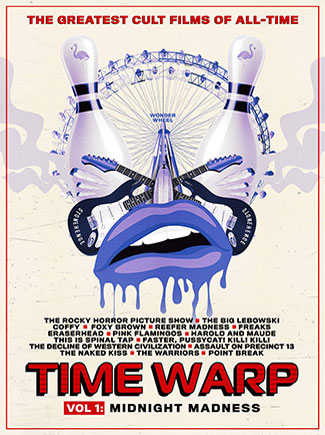