What an absolutely great idea for a movie! Wedding Crashers chronicles the lives of two womanizers as they lie, connive and trick unsuspecting girls into removing their clothing and partaking in some hot loving. And who better to play the parts of the dirtbags than, Owen Wilson and Vince Vaughn.

Well that all sounds good, but unfortunately there are more misses than hits in Wedding Crashers. Pisser one: The movie should have focused more on the aspect of crashing weddings and using women. I mean, c’mon, the movie is named for it! I would love to have seen the guys conning more chicks with more abundant pick-up lines (they use the same ones over and over again). Pisser two: The cheesy love story, which encompasses the majority of the movie, could have been funnier. The antics that Vince Vaughn’s character goes through is pretty funny, but there just wasn’t enough to carry the movie. And if you have a talent like Christopher Walken in the movie, you had better use him! I don’t recall a single funny moment with him in it. Big loss. Pisser three: Nudity . . . naked chicks, there just wasn’t enough of them! When I go to see a movie like Wedding Crashers, I expect to see a shitload of unnecessary tits and ass. I think I speak for every man on this one.

Now of course there were some good parts to the movie as well. As said before, Vince Vaughn is spot on. He is one funny motherfucker. Not to say Owen Wilson was bad, but Vaughn simply shines in his role as a pompous, arrogant douchebag. Another thumbs up for him!

The best part of Wedding Crashers, however, is the cameo by Will Ferrell. Ferrell plays Chaz Reingold, the man who wrote the book on crashing weddings. His part is simply hilarious. I think his scenes alone are worth watching the movie for. 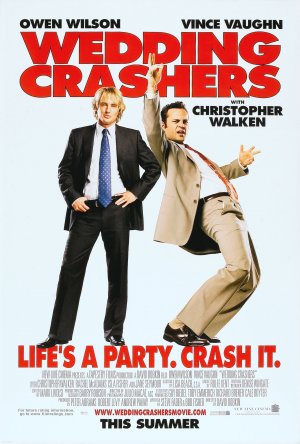