Heavy rain. Flashing sirens. An empty gun. A tall, bloodied man sits pensively on the sidewalk before police take him into custody. It’s a striking image and one which Chapter & Verse begins with to forewarn viewers that it won’t end happily for its protagonist. Unfortunately, though, this setup is as good as Jamal Joseph’s latest directorial effort gets. While Chapter & Verse occasionally has its moments and a solid cast of performers, the film is simply a forgettable and soporific experience which, after its opening reveal, only furthers to spiral into a monotonous and predictable narrative.

Lance Ingram (Daniel Beaty) has just been released from prison after a ten year stint. He struggles to meet the conditions of his parole as nobody is willing to employ him despite his obvious talents in computer engineering. After four weeks, Lance finds himself delivering food across Harlem where he meets a woman named Maddy (Loretta Devine, “First Sunday”) who he quickly befriends. Together they help each other enjoy life amongst a continually troubled neighborhood, where Maddy’s grandson (Khadim Diop, “72 Hours: A Brooklyn Love Story?”) soon risks becoming another thug on the street and another statistic.

The subtitle for Chapter & Verse reads “A Harlem Story” which epitomizes the central point to the film’s plot. While it chooses an archetypal crime narrative to follow through its running time, it primarily focuses on Harlem and its culture. Street performers, demonstrations on the street for justice, police discrimination, gospels and churches, barbershops and parks as social hubs; even as the story continues, Harlem is an ever-present element that’s passionately celebrated as well as criticized. As someone who lives across the Atlantic, it’s a credit to the filmmakers for making life in Harlem be a vicarious experience for the viewer. Beaty, who also co-wrote the film with the director, clearly intended to create a film for — and about — the people of Harlem in the 21st century and to that extent, it cannot be criticized.

However, the narrative itself suffers as a result of its personal attachments to the neighborhood. As Lance continues to work, he meets people from his questionable past, sees Maddy’s grandson hanging out with the wrong crowd, finds his disheveled and homeless father, and becomes a victim of sexual harassment and blackmail by his boss. There are so many plot threads fighting for attention that none receive an opportunity to develop and are either tossed aside or become non-dilemmas. At one point, it’s revealed that Lance has a son who he’s lost contact with because of his dissonant relationship to his ex. Shortly after this element is introduced, it never returns, which begs the question as to why it simply wasn’t taken out altogether (or included in the first place).

Despite its admirable qualities, Chapter & Verse feels aimless and unfocused in its execution. Its concerns for Harlem and the black community in America are vast with each plot element being an observation that has very little to say about its subject. Crime exists, gentrification exists, and the overt sexualization of the black body in American culture exists. But Beaty offers no argument or point for which to discuss or consider. Its non-dilemmas are possibly the most subversive quality the crime drama has by simply not creating a situation whereby its central protagonist becomes victim to recidivism. Although, as the opening scene illustrates, this is far from true. All of its potential and promise is thwarted by an incessant reliance on cliché. What’s left is a story that has nothing intriguing or ingenious to offer and so it feels underwhelming from start to finish. 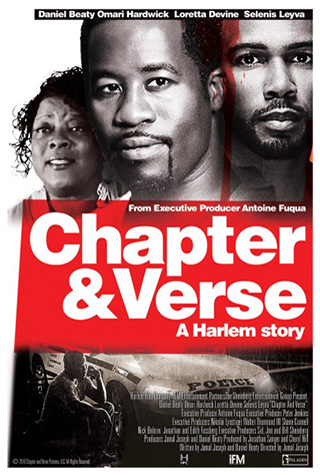