When I was young, “Poltergeist” scared me enough that I used to put a towel over my TV before I went to sleep. Obviously, this was a silly childhood fear, and I eventually outgrew the worry that my death would come at the hands of a spirit that emerged from my television. However, as I sat in a darkened theater in 2002, my old fear came roaring back with a vengeance. With both hands ready to pull up on the collar of my turtleneck, I gaped at the screen as a ghostly girl climbed out of a well and then out of the TV to claim her next victim in “The Ring.” Instantly, the American remake of a 1998 Japanese horror film (“Ringu”) solidified itself as one of my favorite horror movies, with its eerie imagery, otherworldly sound effects, and CGI visuals of a new horror icon — Samara, a ghostly girl with stringy black hair. As you might remember, victims are treated to a strange video of unsettling images; immediately after the video ends, the phone rings, and a voice says, “Seven days.” If the viewer doesn’t copy the video and show it to someone else, he or she dies a violent death after Samara emerges from the TV (or any nearby screen).

Fifteen years later, both the video and the girl return in Rings. In this third film of the saga (remember “The Ring Two”? I keep trying to forget), Biology professor Gabriel Brown (Johnny Galecki, “The Big Bang Theory” TV series) is studying the effects of the video and is investigating the afterlife through a series of experiments he calls The Samara Enigma. One of his willing test subjects is Holt (Alex Roe, “The 5th Wave”) whose girlfriend, Julia (Matilda Lutz, “Summertime”), comes searching for him after he goes missing. After discovering Gabriel’s research laboratory and chasing down another test subject, Skye (Aimee Teegarden, “Scream 4”), Julia comes to watching the doomed video, but is warned away from it by Holt through text message.

Yet, despite being told about the curse, Julia takes it upon herself to watch the video anyway. Panicked about what she has done, Holt reconnects with Gabriel, and the three of them begin searching for a way to end the cycle of deaths. They discover new footage embedded in Holt’s copy of the video and Julia and Holt follow the clues to a small town and the mysterious disappearance of a girl named Evelyn. Visions begin to plague Julia, and the closer they get to finding what happened to Evelyn, the more Julia realizes Evelyn and Samara have more in common than creepy videos.

Directed by F. Javier Gutiérrez (“Before the Fall”) and written by David Loucka, Jacob Estes, and Akiva Goldsman, Rings is disappointing, silly, and severely lacking in tension and suspense. Its only possible saving grace is that teenagers may not have seen the original film and might (*might*) be freaked out by Samara’s antics. Unfortunately, the film relies heavily on the fact that the audience is familiar with “The Ring,” as any explanation is randomly tossed in here and there, so any dread and fear felt in the original isn’t cultivated at all. The prologue is the only really effective portion of the movie — a passenger on a plane looks visibly uncomfortable, and is chatted up by a girl across the aisle. He reveals that he watched a creepy video seven days ago, and feels optimistic that he’s about to cheat death. Of course, we all know how that goes, and the chaos that ensues is pretty entertaining.

Sadly, the rest of the movie goes downhill steadily from there.

The actors are mostly vapid space fillers who look like they’ve watched too much television, and even Galecki seems like he’s phoning it in. The editing is very jarring in a lot of scenes, and while you could make an argument for intent, it’s not effective in creating any kind of dark atmosphere. Instead, the editing of Julia’s visions is simply distracting. Additionally, there are a few continuity errors that are especially frustrating for those of us paying attention to the mythology of the film — for instance, there’s a character who mysteriously escapes his “seven days” deadline, and no copy of the video was ever made to “save” him. The secrets of the film are predictable and the revelations are clichéd; there’s just nothing original about any of it.

The only bright spot in the film is Vincent D’Onofrio (“The Magnificent Seven”), who plays a blind man who lives in the town where Julia and Holt search for information about Evelyn. Because I had avoided trailers for the film (I’m pretty frustrated by how much trailers spoil films nowadays), I had no idea he was even in the movie and seeing him onscreen in a film filled with drudgery made it slightly less so.

Rings is tedious and lazy, simultaneously expecting the audience to know its mythology, but still be shocked by old tricks from the 2002 original. I can only hope Samara will finally, permanently be put to rest . . . but we all know how some things just keep circling back around. 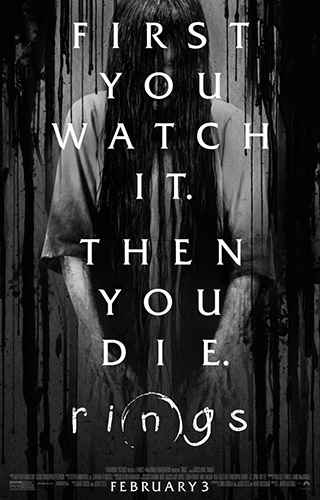