In Havenhurst, a recovering alcoholic takes up residence in a Gothic apartment building in an effort to locate her missing friend, herself an addict, and finds a rabbit hole worthy of Lewis Carroll himself. The movie is truly effective at bringing the scares, with an atmosphere of unease and a typically amazing performance by Fionnula Flanagan (“The Guard”) as the devilish landlady.

Jackie (Julie Benz, “Supremacy”) has completed the in-patient rehab portion of her recovery and is welcomed into Havenhurst, a spooky looking building if ever there was one, smack in the middle of a metropolis. The kindly Eleanor (Flanagan) explains that she accepts recovering tenants as a way of helping others, but she warns Jackie that she does not tolerate backsliding. This statement is underscored by the tempestuous exit of a fellow tenant who has indeed fallen back into her old habits.

Later, Jackie learns that the apartment she’s been given was her friend Danielle’s apartment when the latter went missing. Fun little coincidence! Danielle’s belongings are still there, too, including her expensive camera. Knowing that her friend was an avid photographer, Jackie surmises that Danielle wouldn’t have just left the camera there, contrary to old Eleanor’s claims that Danielle and her live-in boyfriend just up and went. This leads Jackie to enlist the help of an ex-cop friend, Tim (Josh Stamberg, “Legion”), who agrees to look into the matter.

The apartment next door to Jackie is a little suspicious as well. Well, in the domestic sense, not the psychological or spiritual sense, which is good. A tween named Sarah (Belle Shouse) lives there with her foster parents Tammy (Dendrie Taylor, “Saving Mr. Banks”) and Wayne (Toby Huss, “42”), who seem to be arguing violently each time Jackie passes by. And Sarah, a quiet girl who likes to roller skate in the hallways, seems to know a little more about the weird goings-on in the complex than she’s letting on.

When things start to get a little intense — walls appearing where doors had been, more tenants just up and disappearing, bloody scenes that are cleaned up mysteriously in a matter of minutes, just in time for the cops to show up and awkwardly apologize for bothering the nice landlady — Jackie continues her pursuit of the truth, with Sarah in tow. But will she run afoul of the Machiavellian Eleanor?

Thankfully, Benz makes for a capable heroine, and the script for Havenhurst is tight enough that we don’t see Jackie making too many dumb decisions. For example, she calls Tim when she needs his help, rather than plugging away on her own. And for his part, Tim doesn’t not believe Jackie’s claims that’s something is out of whack at Havenhurst. But hey, he’s a cop, and there’s only so much he can do before he’s accused of harassing a little old lady who has a lot of money at her disposal. As a trivial aside, Jackie’s friend Danielle is played by Danielle Harris, who appeared in three Halloween films. It’s always nice to see experienced horror actors getting work.

But it’s Flanagan, whom I recently saw in “Trash Fire,” who really lifts this thriller. Man, does she command the screen. She brings a perfect mix of kindly matron and amoral witch. “Why officer, I cannot imagine anything so terrible could happen here at Havenhurst! Would you like some more tea?” Flanagan’s so good that you’re not sure whether you want to hug her or cut her head off. And she was really good in “Trash Fire,” as a vindictive, menacing grandmother too.

The writers, Andrew C. Erin (who also directed) and Daniel Farrands, do an excellent job of letting the audience in on just enough of the complex’s secrets. Knowing what Eleanor and her son Ezra (Matt Lasky, “The Equalizer”) are up to is one thing; knowing the extent of their vile psychoses is quite another. And, even better, the screenwriters leave the ending of Havenhurst in doubt right up to the very end with a couple of neat twists. And they aren’t the kind of twists that negate the previous 90 minutes of the movie, as happens in some of the more well-known mind-bending thrillers. Everything sort of makes sense when all is said and done; it’s just not the sense you were expecting. 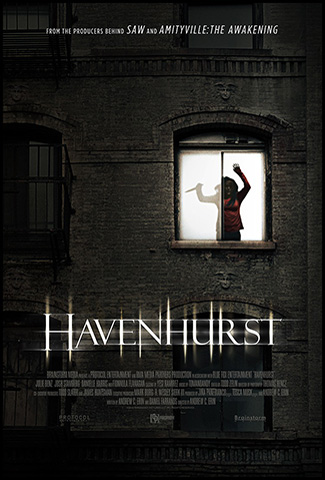