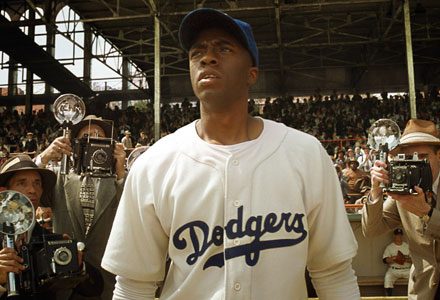 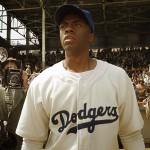 Making a film based upon an iconic figure, such as Lincoln or Gandhi, forces one to walk a thin line between legend and humanization. How do we show the warts (no pun intended in Honest Abe’s case) and foibles and yet still uphold the impeccable character of the subject. Such was the task of writer/director Brian Helgeland (“A Knight’s Tale,” screenwriting credit for “L.A. Confidential“), in the newest Warner Bros. release, 42, a movie based on two years in the life of professional baseball player Jack Roosevelt Robinson.

Known better as Jackie Robinson, he became the first black player in the Major Leagues, breaking the longtime color barrier in 1947 (other African-Americans such as Josh Gibson, Roy Campanella and Satchel Paige were considered, but nixed for various reasons, although the latter two eventually joined the Majors).

Starring relative newcomer Chadwick Boseman (“The Kill Hole“), who bears enough of a resemblance of Robinson to make his performance passable, if not workmanlike, along with ancient Harrison Ford as Brooklyn Dodger General Manager Branch Rickey, Helgeland has created an earnest and sincere biopic that deserves telling (even though Robinson himself starred in the first biography of the man in 1950). Unfortunately it runs a bit long in the tooth and takes little, if any, chances.

It plays out like the director was trying to film Mt. Rushmore by splicing in scenes from “The Natural;” it works on a fundamentally laudatory level, yet seems almost detached at times because the outcome is a known quantity. Little dramatic license was exhibited, so there were really no surprises for the audience. The film “Titanic” had the same problem, yet James Cameron was able to add some interesting moments here and there, enough to keep the project afloat for more than two hours.

42 runs about 128 minutes (although at times it seems to go on a lot longer), and contains more than enough examples of blatant race-baiting that seems strangely foreign to today’s viewers, but were very real at the time. Alan Tudyk (“Transformers: Dark of the Moon“), for example, has the thankless task of playing the redneck manager of the Philadelphia Phillies who’s every other utterance is the “n” word and has a cracker accent that comes straight from central casting.

But Robinson is not only verbally abused, he’s also beaned, spiked, spit on, boycotted, thrown at and degraded in other various and sundry ways. And except for a meltdown in an Ebbett’s Field tunnel, he maintains the grace reserved for a demigod. Boseman’s clenched jaw and stern demeanor is given a rest — ever so slightly — when he interacts with wife, Rachel (Nicole Beharie, “The Last Fall“) and black reporter Wendell Smith (Andre Holland, “1600 Penn” TV series). 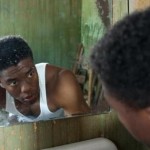 Harrison Ford, as the man who signed Robinson, once again goes into his gravelly-voiced curmudgeon mode that he seems to have been stuck in since 2006’s “Firewall,” but at least his Rickey has passion and heart. He pushes the often-reluctant star to forget the catcalls, insults and slurs and just play the game, to beat his oppressors on the field. His scenes with Boseman are the best in the picture. Robinson’s teammates, though, are not given much to do but either stare angrily at the colored interloper or gush in wonderment at his amazing diamond skills. Two exceptions to this are pitcher Ralph Branca (Hamish Linklater, “Battleship“) and Kentucky-bred shortstop Pee Wee Reese (Lucas Black, “The Fast and the Furious: Tokyo Drift“), the former a bumbling but sincere admirer, while the latter actually puts his life and reputation on the line to befriend the black ballplayer.

Ultimately, 42 is inspiring, but not as entertaining as it could have been. Had the deity’s nose been tweaked, 42 could have been more like “61*,” the Billy Crystal homage film about Roger Maris and the 1961 home run chase: True to life, but a lot of fun with more drama and more human interest. 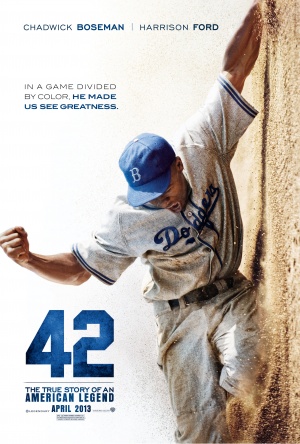