Fueled by over-prescription of highly addictive painkillers, two thirds of all drug overdose deaths reported in 2016 involved opioids. Though the film industry has been late in dramatizing the epidemic, several high profile films have been released this year on the subject including Peter Hedges’ powerful and moving Ben is Back, starring the director’s son, Lucas Hedges (“Three Billboards outside Ebbing, Missouri”). Nominated for Best Supporting Actor at the 2017 Oscars for his role in “Manchester by the Sea,” Hedges is 19-year-old Ben Burns, an addict released from rehab by his sponsor to come home for one day to celebrate Christmas with his family.

Returning from church on Christmas Eve morning, Ben’s mother Holly (Julia Roberts, “Mother’s Day”) is startled to see her son standing in front of the car as she drives up to her house. Ben has been in rehab since he nearly died after becoming hooked on painkillers resulting from a sports injury, a habit that eventually led to him selling drugs to young people in the neighborhood, incidents that neither Ben, the drug dealers, or the victim’s and their families will ever forget. While mom is overjoyed to see him and acts as if this was a normal family holiday, she is reminded by Ben’s sister Ivy (Kathryn Newton, “Blockers”) of her brother’s previous visits that began promisingly but ended badly. Ben will now also have to deal with his no-nonsense stepfather Neal (Courtney B. Vance, “The Mummy”) who has two young children (Mia Fowler and Jakari Fraser) to protect.

While Holly wants to believe Ben that things are good for him right now, knowing that addicts consistently lie, she hides all the prescription drugs and even her jewelry, aware of his past reassurances that did not work out. Ben has been clean for 27 days but, beneath his “everything is just fine” facade, we can sense his vulnerability and the look on his face belies his assurances that he will not let his family down once again. Neal wants to send Ben back to rehab but Holly agrees to let him stay as long as he meets her terms. These include undergoing a drug test and allowing her to always be at his side. While he agrees to her conditions, there are triggers everywhere in the house.

The attic not only holds Christmas ornaments but a reminder of the places he used to hide his drugs. Even going to the mall to buy presents is fraught with danger. Fortunately he is not aware of Holly’s heated confrontation in the mall with the doctor who originally prescribed the painkillers to Ben. Even though the scene is contrived, it is not without a certain power. Feeling shaky, Ben, however, has to leave the mall for a Narcotics Anonymous meeting and Holly is right there with him listening to his emotional talk describing his present state of mind. Returning home, however, the family discovers that their house has been vandalized: Windows broken, the Christmas tree leveled, and their beloved dog Ponce missing. The film then goes off on a risky tangent as Ben and Holly undertake an all-night pursuit to find Ponce.

While visiting some seedy characters that Ben had been involved with during his time as an addict and drug dealer, Ben is Back becomes more of a thriller than a family drama. Though Julia Roberts’ performance becomes increasingly overwrought as the danger increases, no one who is not a parent with a child in grave danger is in a position to second guess her behavior. As Ben guides his mom, (Ivy uses the GPS on her iPad to give Holly directions) trying to learn which of his old associates might have been responsible for the break-in, the viewer comes face to face with the realization that being an addict is not something you do only in your bedroom, but has consequences that reverberate into the community, permanently affecting the lives of many people other than yourself. 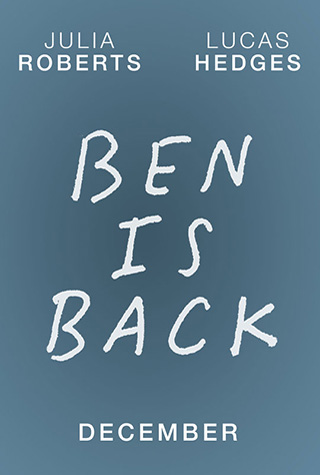