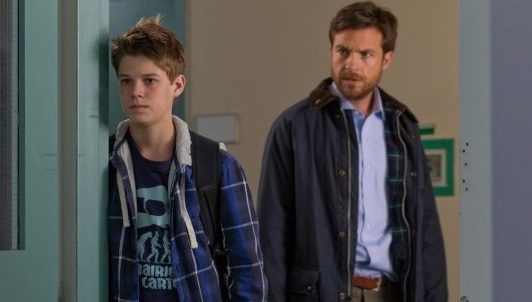 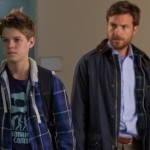 In this world of commercialistic glitz and glamor, it’s hard to come across a truly riveting story these days. But in Disconnect, viewers get just that, and it happens (surprisingly) to revolve around a social criticism of the crazily convoluted, always plugged-in world we live in.

The film begins with a glimpse into the life of Kyle (Max Thieriot, “House at the End of the Street”), a boisterous teen who had been recruited to work in a shabby house with a circle of teens performing virtual sex acts over the Web for paying customers. Kyle is content with his position in the operation, but matters are shaken up a bit when he meets Nina Dunham (Andrea Riseborough, “Oblivion”), a local television reporter looking to do a feature story on Kyle’s experiences. As they become unprofessionally close, the sensibilities of the reporter are stirred as she grapples with remaining appropriate while attempting to help the young teen out of his exploitative situation.

From another angle, Disconnect delves into its most intriguing plot line with the story of Ben Boyd (Jonah Bobo, “Crazy, Stupid, Love.”), a 15-year old introvert who is looked down upon by classmates and has drifted from his parents. He finds “true” friendship when he virtually-meets Jessica Rhony, a Ridgewood student who seems interested in the music he has posted on the web. Ben begins chatting with the girl around the clock, even sending obscene pictures to her after she pressures him to do so. The twist here, is that Jessica is really a fraudulent combination of Jason Dixon (Colin Ford, “We Bought a Zoo”) and Frye (Aviad Bernstein), two classmates (and now by trade, virtual bullies) looking to wrestle as many laughs as they can out of Ben before something goes astray. Ben’s father Rich Boyd (Jason Bateman, “Identity Thief”) is a cellphone-dependent lawyer who seems disconnected with his children, but this drastically changes as Ben’s story begins to unfold.

At the same time, young Jason’s father, former Detective Mike Dixon (Frank Grillo, “The Grey”) becomes privately employed with a couple to track down an identity-theft perpetrator. Derek Hull (Alexander Skarsgård, “Battleship”), the man responsible for hiring Dixon, is an ex-Marine, self-proclaimed “paper-pusher” who seems down on his luck and very dejected; a possible display of PTSD or one of the many struggles soldiers face when assimilating back into “civility.” His wife, Cindy (Paula Patton, “Mission: Impossible – Ghost Protocol”), is detached from her husband, especially after the couple had lost their young baby Ethan. So, she resorts to virtual support groups and chat rooms to inject some sort of optimism within her. Sadly, one of the chatting partners steals all of their personal information with a Trojan virus and the couple loses their entire life savings and their lives (along with their loans) go into default. With a possible lead, Derek begins a manhunt to track down the person who’d turned his life upside-down, resorting to gun-usage and a fearless temperament.

It may sound a bit confusing, but the pacing of Disconnect is very appropriate and each storyline is given its due diligence. The ensemble cast is not only extremely commendable, but one of the best of the past year. Bateman fronts this cast in terms of notoriety, but he also delivers on all fronts as Rich Boyd. With a scruffy beard and a tireless work ethic, Boyd is poised to help the son he fears had begun hating him. It’s a nice step into drama for Bateman, after a history of outlandish comedies, but it was truly a genuine performance, drawing stark similarities to Robin Williams when the pioneer stepped into dark drama with “One Hour Photo” and “Insomnia.” The rest of the cast is equally as virtuous, because there’s not a second that elapses where I did not feel enmeshed in the story; a testament not only to the acting, but also the direction. 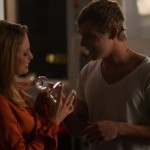 Henry Alex Rubin, the king of commercials, takes a brilliant step into the position as sole director. The camera is appropriately placed throughout (though a bit shaky for a more believable/natural look) and the story unwinds in textbook fashion allowing the drama to build up (but not spoil) in a perfectly-timed manner. So if Disconnect has anything to say about Rubin that his acclaimed documentary “Murderball” didn’t make clear enough, it’s that he has an extremely profitable film future in store for him.

It’ll be even more profitable if he continues to work with Lee Percy and Ken Seng. The editing by Percy is flawless, with neat inclusions of text-bubbles during internet conversations, and the cinematography of Seng is appealing, especially in parts where Hull stakes out in front of the house of the “perpetrator” and when the camera slows toward the end to encapsulate the raw emotion of the moments when the stories come to a sharp apex.

All together, the 115 minute running time of Disconnect flows as simply as a click to a Facebook inbox. And as a person who’s normally enthralled solely by history and science fiction, this Crash reminiscent film is due credit, because it’s not only an eye-opening depiction of modern “ailments,” but an admirably acted film that puts other think-pieces to shame. At one point, Jason Dixon says wearily to his father, “It was supposed to be a joke . . .” Well, I don’t believe that can be said of this compelling film with its baggage of pure, quality life lessons. 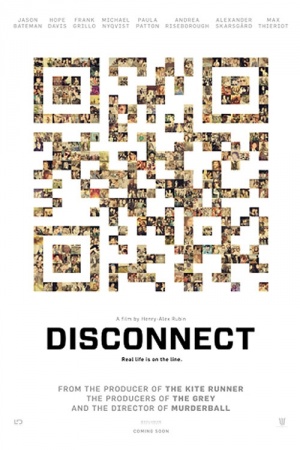