Ah, summer blockbuster time. Sun is shing brightly, birds are chirping and Hollywood throws our way the movies that will make or break their year. The first movie of the season is Mission: Impossible III starring our favorite actor Tom Cruise as spy Ethan Hunt.

Now I’m the first guy to get in line for any decent action flick and I’m even willing to suspend reality to enjoy them. Invariably though, I can never quite manage to forget the truth of the world around us and I start to take notice of all the stupid shit we’re expected to swallow.

Mission: Impossible III continues in the same vein as it predecessors – over the top action and unbelievable story lines put to rock thumping beat. Only this time around, Ethan Hunt has a love interest, portrayed by Michelle Monaghan. This of course leads to a kidnapping, an ‘I’m going to save you’ action sequence and then ends in a flowery love moment. First, lets get to the good.
Action and more action. Mission: Impossible III does it’s damnedest to throw as much shit at you as it can. Covert military operations filled with lots of explosions, gunfire and hand-to-hand combat. Everything a boy could ask for. Girls too, because it has hunky Tom Cruise doing it all! Yippee!

Philip Seymour Hoffman plays an awesomely, villainous motherfucker. Let’s forget a moment that he won an oscar for playing that flamboyant fag Truman Capote. He is meant to play ruthless assholes. He made me cringe with his matter of factness and cool under fire attitude. Bravo.

Now for the bad. And unfortunately there is more bad than good.

The worst fucking story line imaginable. Like I said previously, this plot is so predictable it hurt. I saw through the twist after the first 30 minutes or so. Also, this plot is so full of holes and ridiculousness. The military doing a surgical strike on a busy bridge against their own agents in the middle of rush hour? How fucking stupid are we? White people with guns running around China without so much as having a squinter ask them a question? I mean isn’t China communist with one of the most oppressive regimes in the world? Here’s another one: I doubt my wife would stick with me if I lied to her about what I do, get her kidnapped, tortured and almost killed, and to top it off, have her kill a few people just to save her own life (cos I couldn’t do it for her)! Where do women like this grow? I want to start farming!

In the end, Hollywood wanted to show a more approachable, loving side to Cruise’s character. Unfortunately, I didn’t see anything that resembles that. Any man would fight for his family. Ving Rhames claimed he had a larger role and was more central to Mission: Impossible III. I didn’t see that either. Hell, the two new agents in the team had just as much face time as Rhames did. Another let down. In my good conscience I cannot look you, the viewer in the eyes, and tell you, you are going to see a good movie. If I were to do that, you’d want to slap my thighs with bamboo sticks ’til I cried. And fuck knows I don’t want that to happen. 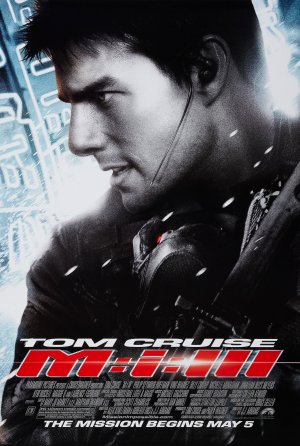