Martin McDonagh’s (“Seven Psychopaths”) Three Billboards Outside Ebbing, Missouri is a mix of black (and politically incorrect) comedy and heartfelt drama that takes us on a wild, mostly improbable but highly entertaining ride. Set in the fictional town of Ebbing, Missouri, Francis McDormand (“Burn After Reading”), who carries the film in one of her best roles, is the recently-divorced Mildred Hayes, a feisty, angry, depressed, but very determined woman with a warrior mentality who lost her daughter Angela only seven months ago in a rape and murder that still has not been solved.

To make things worse, her abusive husband Charlie (John Hawkes, “Everest”) has left her for a dim nineteen-year-old zoo attendant, and her son Robbie (Lucas Hedges, “Manchester by the Sea”) just wants to forget the past and get on with his life. Instead of carrying placards and marching in front of the police station the way many people might protest, Mildred catches sight of three dilapidated billboards along an old highway leading into town that have not been used since Superman peanut butter was all the rage. With the help of Red Welby (Caleb Landry Jones, “The Florida Project”) who runs the local advertising agency, she rents the billboards and plasters signs on them in flaming red that carry the messages: “Raped While Dying,” “And Still No Arrests,” “How Come Chief Willoughby?” Her stated purpose is “to concentrate the mind, some.”

The Willoughby referred to is Ebbing’s Police Chief played by Woody Harrelson (“War for the Planet of the Apes”) who masks a soft heart with a veneer of toughness. Willoughby, who suffers from advanced cancer, takes the opportunity to visit Mildred and take her through what has actually been done on the case. Bottom line, the police are doing everything they can, but there are no suspects and nothing has been learned from the DNA evidence. The ensuing media circus, however, brings out the worst in people, many who come to the chief’s defense, especially police deputy Jason Dixon (Sam Rockwell, “The Way Way Back”), an unabashed white racist who lives with his overbearing mother (Sandy Martin, “It’s Always Sunny in Philadelphia” TV series).

Mildred behaves irrationally in her single-minded quest for justice/revenge, at one point tossing Molotov cocktails at the police station and kicking high-schoolers in the groin (neither of which resulted in any punishment), yet Dixon’s over-the-top antics top hers tenfold. In one scene, he leaves his desk to go to the ad agency across the street to exact vengeance on the unsuspecting Red. There is also tons of snarky dialogue and condescending put-downs, some clever, others not so much, but McDonagh can see the good in people and works to make that available to the viewer.

At a key moment, the characters recognize each other, not as protagonists in the midst of battle, but as human beings and the film becomes more about the complexities of the human condition than the eccentricities of its colorful characters. Willoughby is as frustrated as Mildred by the lack of results in Angela’s death but tries to camouflage it with reassuring talk. On her part, Mildred comforts Willoughby when he coughs up blood that splatters in her face, and the vengeance that is eating away at her is, at least momentarily, replaced by compassion.

Even Dixon shows character growth after a violent outburst separates him from his job. While not much of what happens in Three Billboards Outside Ebbing, Missouri can be confused with reality, what is real is the residue of decency present in even the most hard-edged characters. What is also real, unfortunately, is the not too startling revelation of how the prevailing police culture often results in violence against women going unpunished. 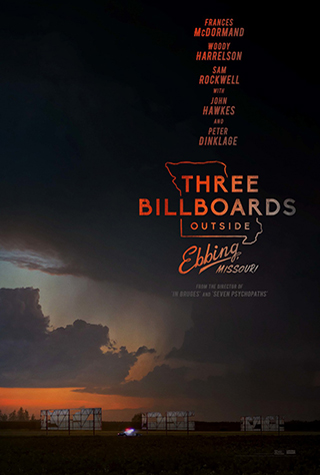