As the year ends and holidays approach, more and more Oscar bait gets churned out for Academy consideration. Lost in this glut is the release of lesser-known foreign films that get quickly shoveled into American obscurity after getting viewed by a privileged select few. Lost in Paris, sadly, will likely become of those undiscovered gems. It’s a huge shame, because there’s a lot that both casual film-goers and more discerning movie buffs can appreciate here.

After Fiona (Fiona Gordon, “The Fairy”), a librarian in Canada, receives a letter of distress from her aging Aunt Martha (Oscar-nominee Emmanuelle Riva, “Amour,” in one of her final roles), she travels to Paris to find her. While traversing through the city of love, she embarks on a series of misadventures that include a quirky homeless man named Dom (Dominique Abel, “The Brand New Testament”), a stray dog, mistaken identity at a funeral, and a very, very handsome Canadian mountie.

Having premiered at Telluride Film Festival over a year ago, Lost in Paris is a delight on multiple fronts. Its visual palette is bright, colorful, and attention-grabbing, yet at times would serve just as well as a black and white silent film. The score lends itself to both sides as well, at times capturing the familiar romance of France that we all know and love and at others paying homage to a much older time in cinema.

Real life married couple Gordon and Abel own both of their characters and the situational comedy that ensues around them. Physicality plays a big part for both of them throughout the movie, as Fiona finds herself (more than once) falling off of structures into large bodies of water, while Dom’s entire introduction is mostly wordless and purely visual. Even Riva, whilst seated on a park bench, gets an opportunity to perform one of those “dancing while seated” musical numbers that harkens back to musicals of old, and she looks like she’s having a blast doing it.

That being said, the script and the characters themselves are not very deep, but they’re never treated like they should be. Dialog, while not exactly “minimal,” is rather sparingly used in favor of visuals. The film runs only 83 minutes, yet it only feels barely justified in doing so. Individual set pieces are amusing, but there are occasional lulls where sequences go on just a hair too long, such as when Fiona and Dom share a sensual dance on a boat and another when they fantasize about each other while separated. On the flip-side, there are also moments that could have gone on even longer, particularly a scene involving a ladder at the top of the Eiffel tower.

At the end of the day, though, Lost in Paris has a unique and innocent heart. It delivers the best out of its stars through a very loose script, all the while basking in reverence to Charlie Chaplin’s silent, Jacques Tati’s mid-century, and Wes Anderson’s modern sensibilities. It’s a “love it or hate it” experience to be sure, but in a season no doubt bombarded with other films taking themselves too seriously and receiving American recognition for it, it is undoubtedly worth a shot. 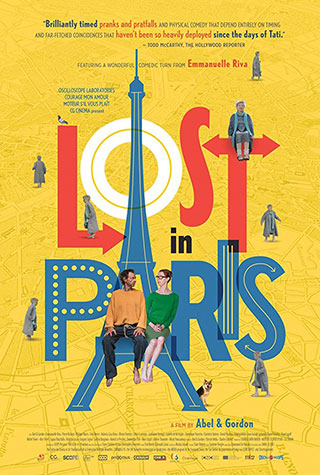