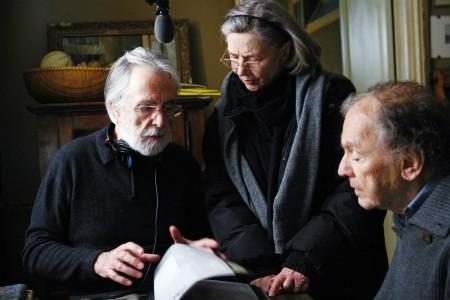 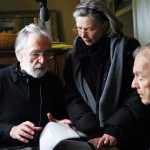 In Michael Haneke’s Amour, Palme d’Or winner at the 2012 Cannes Film Festival, Georges (Jean-Louis Trintignant) watches over his loved one, Anne (Emmanuelle Riva), as she gradually loses control of the precious attributes of body and mind after a series of strokes. In his usual austere style, Haneke avoids sentimentality and even outward displays of emotion to present a carefully controlled, almost clinical picture of devoted caregiving, concentrating on Georges day-to-day support for his fading companion: Convincing her to take food and drink, helping her go to bed, to walk, go to the toilet and countless other mundane tasks.

Both retired piano teachers in their eighties, Anne and Georges live in an upscale Paris apartment surrounded with a huge library of books and a baby grand piano in the living room. After a brief opening scene that shows firemen breaking into the apartment, in flashback we see the devoted couple as they attend a piano recital of Alexandre (Alexandre Tharaud), one of their most promising students and both return home in good spirits. The first jarring note occurs when Georges and Anne discover that the lock on their front door has been broken and realize that there has been an attempted break-in.

The scene is harrowing because of the anticipation of one of Haneke’s visceral shocks but everything seems in order. The next morning, however, when they sit down for breakfast, Anne suddenly freezes and loses awareness of Georges’ presence in the room and is oblivious to his questions about what is wrong. He knows something is definitely not right when she suddenly regains her faculties and has no memory of what took place. When she pours tea, the liquid misses the cup and lands on the kitchen table. Anne has suffered a stroke and, after an unsuccessful operation to remove an obstruction in her carotid artery, her left side is paralyzed and she forced to use a wheelchair.

Shaken by the hospital experience, she makes her husband promise that he will never bring her again to the hospital. As Anne’s condition seems to stabilize, a second stroke robs her of the ability to speak coherently and, concurrently, of her dignity. A visit by their daughter Eva (Isabelle Huppert) who fights against acceptance of the inevitable only adds to the distress. Another visit by Alexandre is awkward and unsettling and the appearance of a pigeon that flies in from an open window seems to signal the growing feeling of being trapped. Though Amour largely avoids disturbing shocks, a dream sequence with Georges standing in the hallway with water up to his knees and a hand reaching out to grab him is a reflection of his growing terror. His patience challenged, Georges looks for a way to end the suffering. 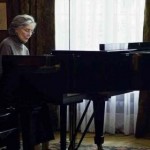 For a film about death and dying, the subject hardly ever comes up in a meaningful way except in Georges’ negative comments about a friend’s funeral he has just attended. Though without an overt spiritual context, the cumulative affect of Amour is powerful and touching. Without physical displays of love, or even the voicing of the words “Je t’aime,” the love between Georges and Anne is palpable in its expression of kindness and mutual support built over a lifetime. Though the film has Hanekean aspects of being a horror story of the ravages of old age, it is also a celebration of life, a haunting odyssey of two entwined souls who refuse to “go gently into that good night.”

Though we view it from a distance, the masterful performances of Trintignant and Riva ensnare us and conjure up in our mind the dread of our own loved ones going through the same experience. As my wife and I celebrate a birthday and our 37th anniversary this week, Amour not only brings us face to face with our own mortality but causes us to look at life in a new way, reminding us in the words of the poet Rumi that, “This is now. Now is all there is. Don’t wait for then; strike the spark, light the fire . . . dance the way branches of jasmine and cypress dance in a spring wind.” Every minute. Every day. 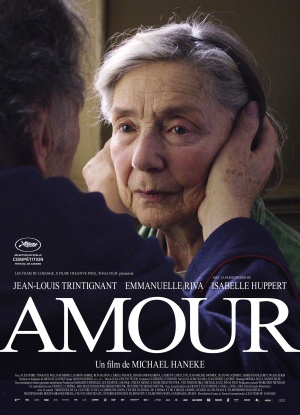