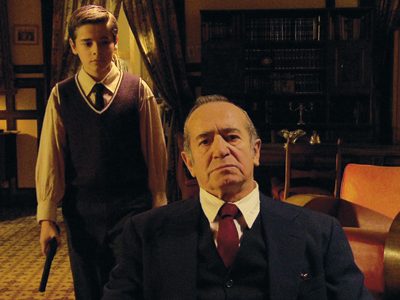 “Ever drifting down the stream – Lingering in the golden gleam – Life, what is it but a dream?” – Lewis Carroll 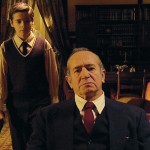 The question of whether we are the dreamers or the one’s being dreamed is explored in Raul Ruiz’ opus posthumous Night Across the Street, a playful and loving adieu that was filmed as Ruiz knew that he was dying. Inspired by Chilean author Hernán del Solar’s short stories, the film suggests that, “at its deeper level, reality is a sort of super-hologram in which the past, present, and future all exist simultaneously.” It is a stylized Fellini-esque odyssey that contains, among other oddities, ships in bottles, games of dominoes and marbles played with death, wordplay and riffs on the word “rhododendron,” dead people having a séance to contact the living, and conversations with Captain Long John Silver and composer Ludwig von Beethoven.

Set in Chile with Spanish dialogue, Ruiz weaves in and out of reality and fantasy, somewhere between the light and the shadow. The film opens as Ruiz’ alter-ego, the elderly Celso Barra (Sergio Hernandez) sits in a poetry class taught by French author Jean Gioni, (Christian Vadim). As Gioni reads poetry, the students are transfixed with their eyes closed, either asleep or in a deep meditation, only broken by the jarring ring of Celso’s alarm clock that he uses to remind himself when to take his pills. Celso is an office bureaucrat who faces retirement and a visit from death. As he talks to Gioni about his childhood, he looks back on his life through his younger self (Santiago Figueroa).

In flashback, we see the young Celso who calls himself Rhododendron (Rhodo for short), appearing as a bright young man who is able to respond quickly to questions about history and the arts. The precocious boy carries on conversations with his projections of Long John Silver (Pedro Villagra) and Beethoven (Sergio Schmied) (in a ridiculous caricature worthy of “Bill and Ted’s Excellent Adventure“). Of course, the real Beethoven would not have been able to hear a word. As the dour-faced and expressionless Beethoven walks through a soccer field with young Celso and his shadow-boxing friend explain the wonders of today’s technology to the frumpy composer, especially the cinema where they all go together. 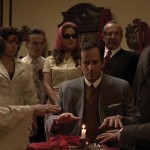 Unfortunately, the composer has a meltdown as guns blaze on screen in a Randolph Scott and Errol Flynn shoot-em-up Western. When asked if he knows what the movie means, the young Celso declares, “We come to have fun, not to learn anything,” which might be a metaphor for the film. As Night Across the Street moves between Don Celso and Rhodo with many stops and characters in-between, the Don continues to recall his childhood memories while awaiting death to pay him a visit. What takes place in the second half of the film cannot really be described but must be experienced. I can tell you that a stranger named Rolo Pedro shows up at Don Celso’s boarding house and the Don knows instinctively that he has come to kill him.

As Ruiz himself describes it, “The horror of an impending crime grows in importance. And the ghosts, the ruins of incomplete lives, the spectres, a mix of “memory and desire”, of broken promises and of “lost illusions”, all come to occupy the stage.” As death becomes an ever growing presence, Ruiz continues to pile on the absurdities as high as the number of farewell speeches given by Celso’s associates, all of which become tiresome. Ruiz, however, seems to be having a good time, laughing at us from beyond the grave. Does Night Across the Street have a message? Perhaps it might be saying, as in the Zen aphorism, that “life doesn’t mean anything, and it doesn’t mean anything that it doesn’t mean anything,” so all that is left to do is laugh -– and, when it’s over, say “cut.”

'Movie Review: Night Across the Street (2012)' has no comments 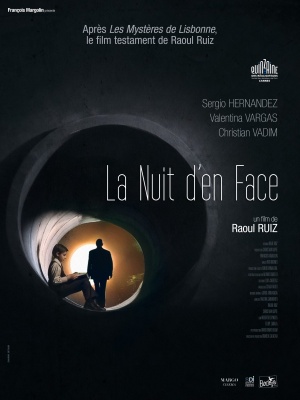