Deadly Virtues: Love.Honour.Obey., the latest film from Ate De Jong — the Dutch veteran director whose career goes back to and beyond “Drop Dead Fred” — is a raw, creepy, silly, and ultimately fairly powerful captive thriller. De Jong makes good use of his deliberately bland single location and draws intense performances from his small, mostly unknown cast.

Alison (Megan Maczko, “A Hologram for the King”) and Tom (Matt Barber, “Plastic”) are a resoundingly regular suburban professional couple. Their home looks like an IKEA showroom and they own His and Hers kitchen aprons. Aaron (Edward Akrout, “The Borgias” TV series) enters their home and finds Alison and Tom engaged in some rough grown-up fun. Aaron takes them hostage, dumping Tom in the bath, gagged and bound. He then proceeds to play happy families with Alison, whilst periodically removing Tom’s fingers, one by one.

“Your only chance of survival is compliance,” Aaron warns Alison. He wishes for her to desire him as a “loving wife” would. “It’s not enough for me to have you,” he insists, “I need for you to want me.” There are shades of Laurence Olivier’s Crassus from “Spartacus,” and in Aaron’s jealous pursuit of the ostensible normality of the marital life, there is also something of Kevin Spacey’s envious John Doe from David Fincher’s “Se7en.”

Behind the façade of ordinariness lie secrets, of course. It looks all the world like the rough sex the married couple enjoy could be a domination fantasy. But through Aaron indulging the same assumption, we realize that the dominance that Tom wields over Alison is something more sinister and pernicious.

The film skates on some very thin ice with its portrayal of Aaron. He’s a master of quiet self-aggrandizement, and frequently comes across as a rape fantasy apologist. I trust we’re not meant to sympathize with Aaron, who’s clearly a self-justifying slimeball. But the film does dare to position him as an antihero, opening with the proverb, “When a pupil is ready to learn, a teacher will appear,” and ending with the quiet revelation that he is a fixer by trade.

We get the classic abusive partner trick: Aaron has the appearance of the avenging angel — but we almost forget that it is only relative to a greater abuse that Alison is undergoing. The film is pulling the wool over our eyes in the way an abuser might. And while De Jong exclusively employs the dreaded Male Gaze, I give the benefit of the doubt to Mark Rogers, the screenwriter, for exploring — rather than exploiting — the central themes of relationships and power.

Themes, it must be said, which have been better explored in foreign-language fare like Andrés Baiz’s “The Hidden Face,” or either one of Michael Haneke’s “Funny Games” films. The chief problems for Deadly Virtues: Love.Honour.Obey. come from its setup, which often makes little sense. There’s a conspicuous lack of fight from Alison, who in Aaron’s frequent absence takes every opportunity to hasten to the bathroom to check on Tom, yet makes zero effort to, say, alert the neighbors. The rules of captivity that the film establishes just aren’t tight enough to create a satisfying, “Misery”-like tension.

Where the film is more successful is away from the schlock (which inevitably lands hard in the end), and in the more subtle moments shared between Aaron and Alison as they play their tense game. At one point, Aaron gives Alison her choice of outfit. It’s a strong scene that encapsulates the central theme of men subconsciously seeking to wield control over the women they purport to love: You may be sexy, but only when I permit it. In the same moment it is revealed that Tom never liked Alison wearing the lingerie that she herself designed. Her sexuality is allowed, but only on his terms.

However uncomfortable we feel, there’s little that’s outwardly graphic or shocking for the sake of it. What we actually see is tame; what is implied is thoroughly disturbing. Yet the melodrama and the yelling arrives before the final curtain; and that’s okay, because it’s an intensity earned through the thoughtful, complex meanderings that led to it. Not to mention the fine performances that have carried us there. Maczko in particular excels in a role that demands submission and strength in equal measure.

In craft terms, De Jong directs competently and unfussily in a confined domestic environment, keeping things simple (a few Dutch angles and fag-end closeups aside) and geographically clear. It feels grounded in a way that some of the aforementioned films are not, and it’s ironically scored by Fons Merkies with an everything’s-okay-on-the-ranch ambient piano score.

A tough watch which hovers close to crassness, Deadly Virtues: Love.Honour.Obey. pulls off its balancing act with a consistently intriguing, squirming creepiness, and a clear sense of purpose. All of its individual elements have been done better elsewhere, but as a complete package it’s a perfectly solid and often thought-provoking home-invasion thriller. One which just happens to invade a little deeper than the norm. 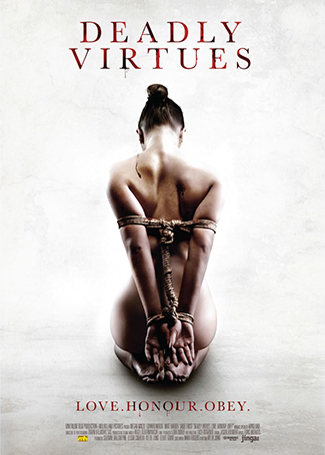