The bold debut, We (Wij), from Dutch director Rene Eller uses various unreliable narrators and a fractured chronology to create an intricate and arresting new spin on coming-of-age tropes. The ostensible setup is a typical teen movie: A group of friends find a shack in the woods and use it as a base for their summer of fun. Except such fun is comprised of polyamorous sex, followed by prostitution, blackmail and death.

With its disarming rawness and anything-goes attitude, We has some of the debauched energy and moral grayness of early Larry Clark, although Eller is more stylish and more arch. There are certain shades of Yann Gonzalez’s “You and the Night” in its blend of heightened drama and kinkiness run amuck, and one hardcore scene recalls Lars von Trier’s “The Idiots.”

Eller gradually draws you into the teenagers’ lives; so, by the end, you empathize and despise in equal measure. In one chapter a character may be background fodder, only to be foregrounded the next. Covering just a few key events from different perspectives helps to illustrate their twisted, self-justifying world. Extensive narration can be a lazy storytelling shortcut, but here it works because one of the key themes is the unreliability of the testimonies.

One thing that reliably does happen is that a specific character dies. We don’t immediately know how or why. The film plays with chronology in a complex, but never confusing, way. This editing technique maximizes the impact of crucial events; and the shocking death, alluded to throughout, isn’t witnessed until the final act.

Eller’s film begins with lush summer sun beams and ends with the cold light of fall, sunsetting his cast of beautiful young things. The performances are committed — the story requires a peculiar amount of (literally) naked honesty, to the point where one almost starts to feel a kind of “Blue is the Warmest Color” ickiness.

It’s through the characters’ attitude to sex — and sexual politics — that we gather clues to the legitimacy of their narration. Simon (Tijmen Govaerts, “Girl”), Femke’s (Salomé van Grunsven, “Bumi Manusia”) boyfriend, has moral doubts about the group’s polyamorous antics. Liesl (Pauline Casteleyn) is doing it for her “reality-art,” as she tries to drill down to the sordid truth of human nature. She says she wants a series of abortions, and she’ll put the fetuses in jars and chart the course of baby development. It’s the art of post-millennial shock culture.

Perhaps the most grotesque among the troupe is Thomas (Aimé Claeys, “The Twelve” TV series), the cruel and vindictive ringleader. His narration is his testimony to the court, and he paints he and his friends as victims rather than perpetrators. He’s the embodiment of toxic masculinity, regarding sex as a means to — and a means of — power, and his possessive attitude toward women transforms him into a violent pimp.

His is the most extreme motivation. But there’s something shared between all these middle-class kids. They look to their comfortable parents and are terrified by the predictable path they seen before them. Their resentment is born of boredom and white privilege, but also the privilege of youth: The uniquely dangerous moment where the adult drives exist, but none of the adult responsibilities do. They see themselves as outside the system. Yet, of course, they end up simply exploiting the same system for their own profit, as what begins as the free expression of sexuality — shared, consensual exploration — becomes more sinister and depraved.

Apparently based on “true stories” (note the plural), the takeaway from all this is clouded. Careful what you rebel against, perhaps Eller is saying with We, and what form that rebellion takes. Careful that you don’t become the systemic thing that you despise. Distancing is laudable, although I did find the final moment to be a cheap shot of forced ambiguity. But it’s one of few dud notes in a smart, confrontational, well-acted and stunningly edited modern fable about the unleashing of the id. 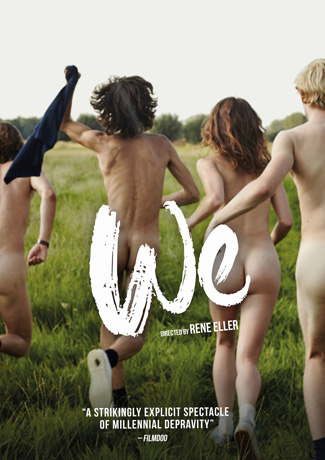