Hope Gap is one of those typical independent movies, where mood, atmosphere and setting dominates more than the narrative. There are no complaints here, because the film’s frequent dallying at these seaside locations and our watching the characters walk along the shoreline or climb up various rocky features is quite beautiful to look at. I also liked the clear contrast painted between the outdoors and the indoors, with interior settings filled with tension and the outdoors used as a means of catharsis.

The film is based on director and writer William Nicholson’s own experiences concerning the failing of his parents’ marriage. We follow Grace (Annette Bening, “Captain Marvel”) and Edward (Bill Nighy, “Pokémon Detective Pikachu”), and from the very beginning we get the sense that things aren’t right between the two. They live in the same house but with lives that don’t overlap, consumed in their own activities and hobbies. It becomes quite clear that the marriage has become toxic, where Edward feels trapped while Grace wants to bait him into fixing things yet does it in a way that’s counter-productive.

The scenes with Bening and Nighy are appropriately paced, with Nicholson smartly choosing to just focus the action on the two, reminding me a bit of Noah Baumbach’s “Marriage Story,” fleshing out a marriage that is a little farther down the road, with the poignancy hitting even more because we realize that Edward doesn’t love Grace anymore. There is a whole discourse here about love, and how, according to Edward, it shouldn’t feel like work. With Grace it always felt like work, and as he looks back on their life together, he feels that he went in the wrong direction, and leaving her now feels like a step in the right direction. Should love be effortless in the way Edward describes? Maybe. But if Grace wants to work at it and he doesn’t, then the math doesn’t really add up.

Nicholson doesn’t take the easy way out, showing us the flaws and acute truths of these characters. Grace has been cheated on and abandoned by her husband, but at the same time, she is pretty insufferable. We feel sorry for Edward that he had to tolerate years of being with someone he didn’t love anymore, yet we wonder if he could have communicated better instead of taking the “easy” way out.

Grace’s son Jamie (Josh O’Connor, “Florence Foster Jenkins”) starts to fill the void left by Edward in her life, though he also feels the frustrations of being around his mother. He loves her, but she isn’t the easiest person to get along with, and it is even worse now that she’s drowning in the despair of losing Edward. She starts to question her purpose in life; who is she now without her husband? The idea of isolation also starts to peck at her, since it feels like the road ahead is just her walking alone.

Hope Gap isn’t afraid to go into darker topics either — that of death and suicide, which are means we contemplate in the darkest, bleakest moments of our lives — and offers a lifeline I never truly thought about. As Jamie eloquently phrased it, his mom is ahead of him in the journey of life, and seeing how far she has gone gives him the hope to carry on with his journey despite the bumps in the road. She needs to live so that he has the courage to as well, her life is not lived in isolation even if she may not be with her husband anymore.

So despite the film being about the breaking of a marriage and the healing that comes afterwards, it also feels quite universal, a reminder that these hopeless moments in our lives are experiences others have lived through, so we should feel less alone trudging through the pain. 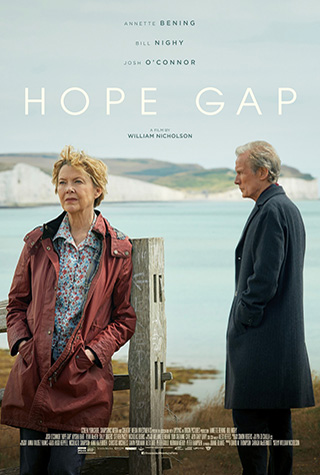