To the Stars is probably my favorite film of the year thus far, and will still rank high in my estimation come end of the year. The film initially premiered at Sundance last year in black and white, but has since been given the color treatment. The change to a colored setting doesn’t take away from the film — dousing it with a sense of currency despite its firm footing in the past — although I can see how the initial black and white aesthetic would capture the 1960s setting with even more authenticity.

The coming of age film for young girls has gained much agency in recent years, less focused on romantic inclinations, with more attention paid to female friendships. Greta Gerwig’s “Lady Bird,” Olivia Wilde’s “Booksmart,” Tayarisha Poe’s “Selah and the Spades” are some recent wonderful examples, and while director Martha Stephens isn’t as experimental with her style — instead pushing forward with more conventional storytelling — the sensitivity to characterization and nuanced portrayal of the people of Wakita makes this film a stand-out.

Iris Deerborne (Kara Hayward, “Manchester by the Sea”) is an outsider in school as well as in her own home. Her mother Francie (Jordana Spiro, “The Goods: Live Hard, Sell Hard”) doesn’t understand her daughter, sewing a pink frilly dress for her to wear at prom when it is clearly the last kind of dress book-loving Iris would want. She mourns her own lost youth, and tries to relive it through Iris and even attempts flirting with younger boys, much to our discomfort. While Iris’ father Hank (Shea Whigham, “Joker”) seems to quietly love his daughter, any defense or compliment bestowed would get on Francie’s nerves, probably because it serves as a reminder that while Hank may love Iris, there doesn’t seem to be much love shared between the two of them, their marriage only coming about because she got pregnant.

A need for love and belonging is a desire that everyone has. Iris desires the hired hand Jeff (Lucas Jade Zumann, “20th Century Women”), who in turn has become a lone wolf after the death of his mother. Along comes Maggie Richmond (Liana Liberato, “Trust”), who is new to town, trailing after her in a cloud of grey smoke the secret of why her family needed to move in the first place. What scandal did she create that necessitated a move across the country? While Maggie lies convincingly to everyone, Iris is much too sharp to buy into her deception, and the two start to become close friends.

With Maggie, Iris starts to see that dressing up and looking nice isn’t such a bad thing (especially if it helps you to catch the eye of the boy you fancy), and Maggie gains a strong sense of purpose as she helps Iris. With each other, they both find a space to belong, daring to reach for the stars towards a space beyond this myopic town, that is, until the secret Maggie is running from catches up with her and the close-minded ways of the folk of Wakita swing in with violence and hate.

To The Stars is a reminder of how much societal expectation a young girl still needs to carry on her shoulders. Maggie’s father expects his daughter to force herself into a box and become what he wants her to be — the beautiful girl who will one day marry the right man. A young girl’s body is also objectified as we see how Iris gets comments about her breasts not only from her mother but from the bunch of leery boys that follow her on the way to school, whose treatment of her is tantamount to sexual harassment.

In her friendship with Maggie, Iris begins to gain agency over her body and self. She discovers that she isn’t a pushover, or someone who wets herself, but someone with the capacity to be confident and strong. She stands up to her mother and gets the young man she fancies, and while the ending feels a little bit rushed and abrupt, I liked that there is some untidiness present, where some things are known and the outcome of other things are left to the imagination. 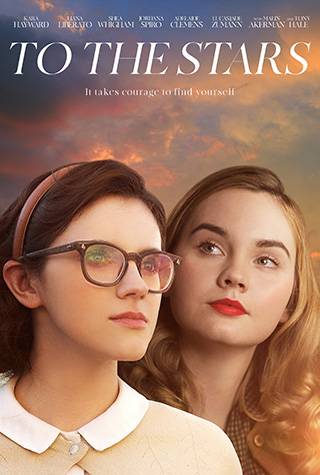