For her fun fictionalized memoir of sorts, Greta Gerwig has painted a coming-of-age tale almost entirely in shades of grey. Lady Bird is the writer/director’s gentle, through passionately prickly look at the haze that lies just beyond adolescence, with Saoirse Ronan (“The Grand Budapest Hotel”) playing Christine, the also titular protagonist who must navigate the perils of Catholic school, juggle her hopes for a culture-rich future, and handle the clashes of opinion with her headstrong mother Marion (Laurie Metcalf, “Georgia Rule”).

Christine goes through everything a movie teen must go through on their path to adulthood. She loses friends, gains friends, experiences different levels of popularity, explores her sexuality, dates a nice guy, dates a bad boy, is exasperated by a parent, hates the place she grew up in, loves the place she grew up in, tests out her interest in various school subjects, and listens to the Dave Matthews Band’s most famous song numerous times.

All the pieces of a familiar puzzle are here, but in Gerwig’s hands, every little piece has been tweaked so that it sides more closely with reality than fiction. Nothing feels overly exaggerated or over-inflated with a sense of puffed importance. Each character has several believable angles that make each of them flawed and none of them terrible.

Even brooding Kyle (Timothée Chalamet, “Call Me by Your Name”), the bad boy of Lady Bird, ends up doing exactly what bad boys do in these stories and yet also skirts the clichés in a way that makes him feel much more like just another kid trying to find and form his identity than a construct required for villainous narrative purposes.

Gerwig starts with stereotypes and then digs deeper to find an actual character in the grab-bag of recycled traits. So Kyle broods and is perpetually staring at some serious book intended for mature readers, but there’s an actual person that we can glimpse beyond the archetypal exterior. Another of Christine’s love interests is Danny (Lucas Hedges, “Manchester by the Sea”), Kyle’s opposite and a gawky, boyish disciple of musical theater. He’s as different than Kyle as he is the same, a familiar type of character that emerges a unique creation.

As an actress herself, Gerwig has clearly developed a particular respect and patience for her performers so that they can craft the characters in personally meaningful ways. For Ronan, this is especially important because while she’s already a veteran of the screen in her early 20s, she still manages to play each lead role in a whole new key.

Christine doesn’t feel like any of Ronan’s past roles and one only has to consider a few minutes of screen time here and a couple memories of her charming turn two years ago in John Crowley’s immigrant romance “Brooklyn” to comprehend the breadth of her chameleonic qualities. She’s an undeniably incredible actress who imbues each character with a fresh, though still mysteriously connected energy.

Beyond the acting, Gerwig applies her specific approach of beginning at a familiar point and then expanding it to allow for more personal observations to other facets of the film as well. Like any teen in a coming-of-age tale, Christine has a goal in sight. It’s a recognizable aim, the desire to attend a specific college and break away from the geographical pinnings of home that she determines are stifling her creativity and growth. This goal also inevitably causes friction between mother and daughter as Marion would much rather see Christine attend a local school and not wander too far from the comforts of family.

But Gerwig again obfuscates the cliché, blurring the clean-cut clarity of the finish line. Sure, Christine yearns to attend a specific sort of school that will help connect to her a world of gourmet culture that exists far beyond the fringes of Sacramento, but she doesn’t really know what she wants to study, where she plans to end up, or with whom.

These are the kinds of questions and answers that coming-of-age movies about the transition from adolescence to adulthood are generally interested in, at least as far as the act of comfortably tying up loose ends is concerned, and it’s here that Gerwig likes to color outside the lines. Christine’s future is unknown and messily so, which makes her plight so roundly relatable. Gerwig senses her audience’s expectations and so serves an authentic mixture of both what the viewer knows from movies and what the viewer knows from real life.

As a result, Lady Bird is a strange movie at times, because it often feels like a very conscious attempt to gently buck every convention in the coming-of-age catalog, but it also feels so utterly and tenderly personal that to accuse of it being calculated seems an affront to Gerwig’s own lived history. It has the intimacy and honesty of a diary entry that we’re probably not supposed to read, but do anyways. It’s a rich ode to passionate characters and their compassionate creators and an engaging exploration of the truths that are revealed on the flipside of the familiar. 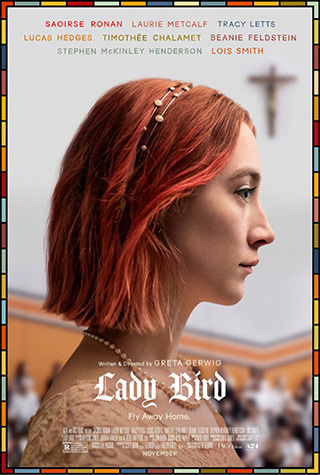