“And if the earthly no longer knows your name, whisper to the silent earth: I’m flowing. To the flashing water say: I am” — Rilke, “Sonnette an Orpheus” (II, 29)

Chiron, in Barry Jenkins’ Oscar-winning film “Moonlight,” in addition to being gay and black, has to deal with drug abuse, bullying, and the lack of a supportive home environment. In contrast, in Luca Guadagnino’s (“A Bigger Splash”) achingly beautiful Call Me by Your Name, 17-year-old Elio’s (Timothée Chalamet, “Love the Coopers”) life is safe, comfortable, and surrounded by love though, like Chiron, he must come to terms with his true identity. Written by three-time Oscar nominee James Ivory and adapted from the 2007 novel by Andre Aciman, Call Me by Your Name is set in the summer of 1983 where Oliver (Armie Hammer, “Free Fire”) is an American research assistant studying with art history Professor Perlman (Michael Stuhlbarg, “Steve Jobs”) at Perlman’s gorgeous villa in Northern Italy.

Oliver arrives at this idyllic setting with its gardens, peach trees, and lakes to greet the professor, his wife Annella (Amira Casar, “Planetarium”) a lover of German poetry, and his teenage son Elio who speaks several languages and transcribes piano scores for the guitar. Shot by Thai cinematographer Sayombhu Mukdeeprom (“Uncle Boonmee Who Can Recall His Past Lives”) and buoyed by new songs from Sufjan Stevens, it is easy to feel yourself present in the languid summer afternoon, as Aciman expresses it, “with the scent of rosemary, the heat, the birds, the cicadas, the sway of palm fronds, the silence that falls like a light linen shawl on an appallingly sunny day.”

With Oliver’s arrival, Elio now has to shift his focus from pursuing his French girlfriend Marzia (Esther Garrel, “Daydreams”) to show the American student around town and give him bike tours of the area. Soon, however, he becomes annoyed by the American’s brusque manner and his abrupt “later” whenever he’s leaving. When Elio, who is Jewish, sees Oliver wearing a Star of David on a chain around his neck, however, he finds a common bond, jokingly telling him that his mother considers their family to be “Jews in discretion.” Sharing the same bathroom, their friendship begins to expand when they engage in conversation and go swimming together. Although Oliver gives Elio a neck massage during a volley ball game, the boy seems unable or unwilling to process the feelings that it brings up in him.

When Oliver causally tells Elio that he seems to know everything, the teenager confesses that he knows everything except “what really matters.” Even when physical intimacy is established, there is the sense that they hold back from fully expressing their feelings and even prefer not to talk about them. Chalamet, in his first leading role, is a revelation, delivering a deeply affecting performance that shows great promise. Hammer’s performance is restrained, but also fully believable, making sure that the age difference does not get in the way of the honest and genuine relationship they have established. As they strengthen their friendship, like lovers, their identities blend into each other and they express it verbally by taking each other’s name. Call Me by Your Name is not an “us versus them” movie. There are no antagonists in the film. It is a celebration of love in all its wonder and mystery.

There is gay sex in the movie but, like “Moonlight,” it is about more than sex. As Guadagnino says, “it is about compassion, trust, and wisdom.” All three of these values are expressed in the conversation between Elio and his dad, an interchange that is moving and wise. Though the film is “gay-themed,” Guadagnino does not pigeonhole the characters into familiar categories and his refusal to deal in stereotypes or manufactured emotion gives the film the space to breathe and reach the place where tension can grow. Like “Moonlight,” Call Me by Your Name has a universal appeal and can touch anyone who has ever felt the confused and conflicting longings of first love, or who knows from experience that, in the words of the song “Plaisir d’amour,” “The joy of love is but a moment long. The pain of love endures the whole life long.” 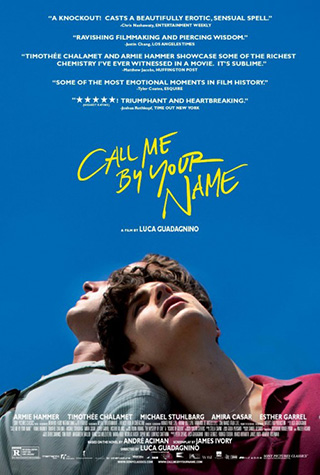