“It was too directly bound to its own anguish to be anything other than a cry of negation; carrying within itself, the seeds of its own destruction.” In August 1966, Mason Williams hurled a Royal typewriter from the open window of a Buick Le Sabre speeding down Highway 91 outside Las Vegas. Patrick Blackwell photographed the strewn wreckage. Along with Edward Ruscha (the driver), the three men published Royal Road Test in 1967. The black and white photographs, illustrating the “Tab Key” as caught in a tumbleweed or the initial point of impact, are clinically captioned. The iconic work reads like a crime scene investigation or unsentimental obituary. Right off the platen, California Typewriter propels the audience into this infamous scene. One can only assume such framing foreshadows the typewriter’s devastating fate.

To the contrary, the film spends the next two hours resuscitating the machine’s image. For along with the art it inspires, the typewriter endures.

This documentary offers insight into the obsessions of various typewriter enthusiasts and collectors, authors, artists, and playwrights. None of the interviews are annotated, which is fine since most are too famous to warrant introduction. And it is a true pleasure to listen to Tom Hanks, (the late great) Sam Shepard, David McCullough, and even John Mayer extol the virtues of the typewriter and its utility in their artistic processes. They treasure the physicality of typing and the way in which the equipment has come to represent an extension of their bodies and minds. In putting words on the physical page, they are able to create something real and tangible, maybe profound. Mayer was inspired by Bob Dylan typewriting lyrics in “Don’t Look Back.” To Mayer, Dylan appeared to be playing an instrument. The first commercially successful machine — the holy grail to another profiled collector — was actually modeled on piano keys. And the audience is eventually introduced to the Boston Typewriter Orchestra, a band that literally plays typewriters as instruments. Their shows usually culminate with one member destroying his instrument ala guitar-smashing god Pete Townshend. The typewriter is also the chosen instrument of Bay Area artist Jeremy Mayer. His typewriter assemblage sculptures are fashioned entirely from disassembled parts, a violent dissection process anathema to some restorers and collectors. He is a hunter in reverse, using every last piece in constructing a deer installation to be exhibited at galleries throughout San Francisco.

The film’s title, California Typewriter, refers to the family-run Berkeley store of the same name, which has been servicing and selling typewriters since 1949, though business has somewhat fallen off as enthusiasm for the machines wanes. For Herb Permillion and Ken Alexander, the affinity for typewriters is also a matter of economics as they carefully navigate the changing technological landscape. Herb and Ken are true craftsmen capable of returning old machines to their original glory and ingeniously engineering new ways to manufacture replacement parts as the last known suppliers go under. The machines themselves, often a work of art — from the self-serving design of the first QWERTY keyboard (“typewriter” can be spelled entirely with letters from first row) to the ornately painted frames — also engage artists to maintain and rebuild them.

The film, despite running a bit long, shares that purity of aestheticism. Director Doug Nichol has created a beautiful meditation on time, success, impermanence, creativity, and the power of art to endure. These themes are further distilled within the relationship between typewriters and modern technology. Despite the advent of personal computers, word processors, and emoticons, there is something exceedingly romantic about sitting in front of a typewriter and just writing, stream of consciousness-style, while temporarily liberated from the red squiggly spell checks and grammatical judgments of Microsoft Word.

With the exception of one psychic poet, all the notable writers were white men born with the distinct privilege of being allowed to write alone in a room of their own. They speak of the typewriter as a postmodern muse — as much the fountainhead of artistic inspiration as the physical process. They opine on its perfect design: The feel of its keys, the tone of its bell, the curvature of its case. Jeremy Mayer pulls pieces for a sculpture of Theia, the Titan goddess of sight. When completed in his image, she will be objectively installed at the offices of Oculus — a sight for virtual realists and venture capitalists to behold. Her creation is particularly troubling taken in context of women being the first typewriters. Women were trained by the manufacturers and their typing services were provided to customers along with the machine. The YWCA typing school further solidified their entry into the clerical workforce. The fact that they could be paid less than men made them even more attractive economically. Women are so rarely afforded the opportunity to reflect on their own creative processes and influences, and their absence here was acutely felt.

I was heartened to learn that the storefront continues to resist the seeds of its destruction. Jeremy helped his friends launch a website and Instagram account. By bridging the gap between technology and analog, they have stayed connected to niche customers, bohemians, and quasi-intellectuals. As automation and robotics become more ubiquitous, California Typewriter feels remarkably relevant and, thankfully, a bit hopeful. Maybe moving forward does not have to be tantamount to throwing the past out the window. 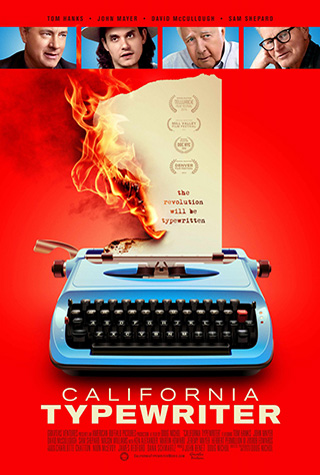