With the film Tiger Girl, writer/director Jakob Lass (“Love Steaks”) deals out a sharply cut, strangely mesmerizing, buddy movie. Set in an unnamed German city, we follow a pair of streetwise Frälueins, who boisterously dispatch any and all bystanders that dare get in their way.

Awkward good-girl Maggie (Maria-Victoria Dragus, “The White Ribbon”) begins training as a top-tier security enforcer. Despite aspiring to play the role of strong defender, she is, in reality, currently more that of a meek victim. That becomes evident, when one night while riding the U-Bahn, Maggie is pestered by slobbering predators. In steps the eponymous “Tiger Girl” (Ella Rumpf, “The Divine Order”), a spiky, tough-as-nails hybrid of Lisbeth Salander and Tyler Durden. After dispatching the would-be assailants in a fist-to-fist brawl, Tiger takes the doe-eyed Maggie under her battle-hardened wing, and renames her “Vanilla” for her apparent innocence.

With her new manic-punky-dream-girl mentor to lead her, Vanilla begins a journey into the darker side of city living. The pair coexist as idealized juvenile delinquents in the sordid parts of the city: Fighting, smashing windows, stealing bicycles, scamming citizens, and dodging the law. Doing what they want, when they want, to whomever they want.

Tiger’s spontaneous personality begins to rub off on Vanilla, gradually undermining the accuracy of the unspoiled nickname. The net accumulation of misdemeanors proves pernicious, however, leading Maggie down an unhinged (and unsustainable) path that even Tiger feels is too extreme. Whereas Tiger has a sense of purpose — albeit perverted — to her outbursts and assaults, Vanilla has no moral compass, and does her increasingly hostile offenses simply because she feels the need to.

To get a sense of the style of Tiger Girl, think Edgar Wright and Quentin Tarantino combined forces and make “Fight Club”: Snappy action cuts, rapid violence, with darkly imposing female leads. It’s brimming with attitude, and the slick editing shuttles through scenes at MDMA-level pace.

Unfortunately the plot, penned by a quintet of writers — Eva-Maria Reimer, Ines Schiller, Hannah Schopf, Nicholas Woche and Lass — doesn’t reach the high-water mark set by the lead performances of Dragus and Rumpf or even Lass’s direction, and the less said about the afterthought ending the better. But despite the seeming lack of narrative foresight, Tiger Girl has an undeniably authentic charm, offering brave cinematography and gutsy characters. We have the Tinman and Lion from “The Wizard of Oz” clearly on display, bringing with them plenty of heart and courage. An invite, however, should have been extended to Scarecrow for want of his brain. 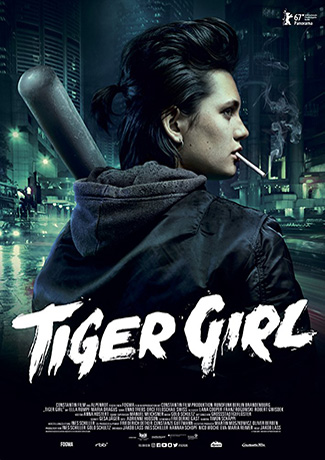