There is nothing remotely foreign about the well-known martial artist/action star Jackie Chan, as he has been kicking butt and taking numbers (mainly in humorous fashion) for nearly 50 years. Undoubtedly skillful and infectiously impish throughout his illustrious career in action cinema, Chan — whether in wild playful mode or pensive yet penetrating form — has seen his share of colorful celluloid mileage as witnessed in his overseas, chop-and-pop comedies (“Drunken Master,” “Half a Loaf of Kung Fu”), popular American-tailored blockbusters (the “Rush Hour” series), family animation (“Kung Fu Panda” series), historical vehicles (“1911,” “Railroad Tigers”) and forgettable and flimsy fare (“Around the World in 80 Days,” “The Tuxedo”). Chan may have matured considerably (now 63-year old), but his remarkable agility, situational instincts on-screen and his inherent ability to energetically entice audiences with his cat-like calisthenics is still a wonder to watch.

For the European-based political thriller, The Foreigner, director Martin Campbell (“Edge of Darkness”) enlists the more serious and retaliatory of Chan’s acrobatic stunt-related services. Based on Stephen Leather’s 1992 novel The Chinaman, we not only get a vehemently sullen Chan out for revenge in the name of his murdered teen daughter from a deadly terrorist blast, but we also inherit a former Bond performer in the suave Pierce Brosnan (whom Campbell directed in the Agent 007 spy vehicle “GoldenEye”) as a local politician with a questionable past with subversive operatives.

Chan plays Quan Ngoc Minh, a Vietnamese immigrant businessman who happens to own a profitable Chinese restaurant in the heart of London. The opening scene starts out innocently enough as proud papa Quan escorts his teenaged daughter Fan (Katie Leung, “Harry Potter” series) to an eatery and no sooner than he can finish saying goodbye, a tremendous bomb blasts out of nowhere that results in her death. Obviously devastated and severely distraught, Quan demands answers and wants desperately the heads of those responsible.

Naturally the flustered Quan, settling deeper and deeper into a dangerous combination of depression and rage, cannot seem to get the unresponsive authorities to cooperate with revealing any suitable findings regarding the bombing investigation. Thus, Quan is pushed to the brink of madness and . . . vengeance. Lucky for us, but so much for the terrorists, the recipe for exacting revenge on behalf of the fallen Fan is rather straight-forward — the affable Quan, who (coincidentally) was once a special forces soldier in the military, aims to collect the bombers’ bloody carcasses as penance. The only question remaining is where does he begin to seek out his young daughter’s murderers?

Well, since it is revealed that the bombing was executed by the extreme measures of IRA nationalists, our diminutive hero decides the best place to start is with Northern Irish minister Liam Hennessy (Brosnan) as he once ran with the armed movement back in the day. Hennessy, an ex-terrorist trying to put his explosive (no pun intended) past behind him, already has a lot of personal and professional strife on the plate. Professionally, being caught between English and Irish allegiances as the political tirade escalates, he must balance his governmental duties. On a personal level, Hennessy periodically clashes with his strongly opinionated wife Mary (Orla Brady, “Into the Badlands” TV series) whose political leanings could cause him further scrutiny.

An angry Quan demanding his undivided attention is the last thing he wants to (or will happily) deal with and so sets the action in motion.

Fans of Chan will embrace the virulent change of pace in seeing their high-energy hero take a break from his usual campy-minded confines (but not his animated, trademark choreographed martial-artistry) even though this potboiler wipes very little dust off of the run-of-the-mill cloak-and-dagger dramatics and rapid-fire bolt-action template that’s been used since time immemorial. The Foreigner is well-meaning, but intermittently unbalanced in its taut and twisty high-wire act of double-dealing and collateral damage. The personification of two men’s fragile psyches corrupted by the restraints of both their past and present-day disillusionment is effectively compelling, however.

Thankfully, an older and bruised Chan’s lamenting and grappling Quan brings a poignant sense of emotional and edgy urgency to this tale of loss and tactical intimidation. Brosnan’s Hennessy is equally satisfying as the psychologically-drained, Downing Street-based centerpiece trying to tread softly between the English political office he is entrusted to uphold and his nostalgic ties with the notorious IRA antagonists he feels beholden to. With their complementary strengths, the adversaries are the reason the source material elevates at all to something more than a typical “out-for-revenge” thriller like “Taken.” The high-octane climatic apartment showdown doesn’t hurt the watchability of The Foreigner either. 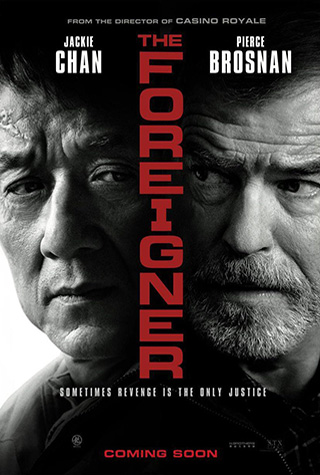