When American audiences last saw our diminutive chopsocky champion, Jackie Chan, he was kicking butt and taking numbers alongside “Jackass” and “The Dukes of Hazzard” star Johnny Knoxville in the flaccid and forgettable 2016 voltage vehicle “Skiptrace.” Well, the sixty-something martial arts megastar has found yet another frenetic farce to strut his stuff as he stars and co-produces in the vintage actioner Railroad Tigers, a vanity project that enlists his son Jaycee to his side.

The good news is that Railroad Tigers is more of an entertaining roar than the aforementioned tiring and convoluted “Skiptrace” (this is not saying that much in terms of a compliment). However, the bad news is that this movie does not challenge Chan and his high-strung hucksters to anything creatively crafty or freshly distinctive despite its nostalgic, stylish feel and loose odes to classic cinema that range from the old-fashioned Robin Hood movies to collaborative capers such as “The Dirty Dozen” and “The Magnificent Seven.” Still, Railroad Tigers is serviceable enough to satisfy watching the aging Chan and his applied magical mastery of chops, kicks and punches provide the escapist cartoon-inspired fight sequences that is the veteran actor’s trademark trickery.

No doubt that Chan has seen his better days in cinema as the maturing martial arts statesman continues to tinker around with formulas while still trying to keep his cinematic relevance intact. One can definitely applaud Chan for his staying power on the big screen regardless of the classic hits, box office bombs or middling movies that have painted his film-making resume. Here, Chan hooks up once again with his “Police Story: Lockdown” and “Little Big Soldier” director, Ding Sheng, and finds himself in a period piece centered around the exploits of a moving train.

It is 1941 in eastern China where Ma Yuan (Chan) is the head porter for a rural railroad station. Ultimately, Yuan becomes the leader of a rebellious squad of railroad workers-turned-freedom fighters whose sole purpose is to hijack a Japanese supply train during the Sino-Japanese war effort in order to accommodate their fellow impoverished citizens. Furthermore, Yuan and his mischievous minions set their sights on the big prize — blowing to smithereens the bridge that serves as the major supply route for the train to further cripple the Japanese transport system. The cockeyed crew are deep-rooted in craziness due to the fact that a.) the risky mission to topple the bridge is suicidal in nature and b.) even professional soldiers are not ballsy enough to take on this kind of agenda against the mighty Japanese forces. Nevertheless, Yuan and his renegades undertake what is an ambitious, albeit far-fetched, gamble.

Naturally, the combination of the clumsiness and caliber of choreographed fisticuffs of Chan and his cheeky charges is the physical source of appeal for this action/comedy military-western (although viewers may yearn for the younger, faster “Supercop” Jackie Chan of yesteryear). Writer-director Sheng (with He Keke’s writing help) inexplicably takes a while to let the animated nuttiness roll before the wackiness is fleshed out along with the kooky characterizations that includes Jackie’s offspring, Jaycee, as one of the maneuvering misfits that participate in this Far East “The Bridge on the River Kwai” knockoff. The supporting players contribute fairly effectively to the farcical proceedings including Darren Wang (“Suddenly Seventeen”) as a Chinese soldier that informs Yuan and his giddy group on the Japanese operations, Kai Wang (“Nirvana in Fire” TV series) as the noodle distributor/sharpshooter Fan Chaun, Alan Ng (“Chinese Zodiac”) as San a pick-pocketer, Fan Xu’s Xing’er (crushing on Chan’s Ma) and Zitao Huang’s tailor Da Hai to name a few. Other noteworthy personalities featured in the mix are the villainous Japanese presence led by the military law enforcer Yumaguchi (Hiroyuki Ikeuchi, “Tokyo Newcomer”) and his femme fatale colleague Yuko (Lanxin Zhang, “Amnesia”).

Overall, while Railroad Tigers is all-too-familiar film fodder for the aging Kung-Fu Crown Prince of Pain, it does hit its stride as Chan and company gives their audience the desired ingredients to make this messy mayhem acceptable — awestruck stunt work, quirky-minded theatrics from the amusing Chan and an obvious nod to some of Hollywood’s notable salutes to train heist flicks and wartime fables that stimulate more than sedate. These “Tigers” claw their way into a frivolous lather but whether or not Chan’s latest spectacle deserves a boarding pass to enjoy the same blueprint thrills . . . well, hey . . . would you rather see the sequel “Skiptrace 2”? I rest my case . . . 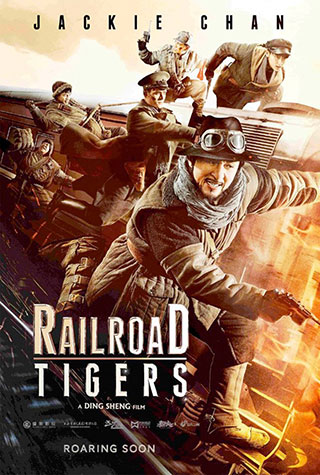