Well let’s see . . . why oh why, would I bother to watch The Dukes of Hazzard? Oh yeah, same reason it’s the number one movie in the land: Jessica Simpson. Every man in the country is flocking to the movie in hopes of catching a glimpse of Ms. Simpson’s tits and ass . . . and last I looked, I am all man. So much so, it hurts.

Anyways, the point of this isn’t to focus on Jessica’s Double D’s, it’s to discuss the merits of the latest offering from Hollywood. For those of you who lived under a rock The Dukes of Hazzard is based off of a television show which chronicled the goings-on of the backwoods Duke family as they fought the law and did stupid shit. The family of course is revamped and is now comprised of: Bo Duke (Seann William Scott), Luke Duke (Johnny Knoxville), Uncle Jessie(Willie Nelson) and Daisy Duke (Jessica Simpson).

So what do I think of the movie? Same thing you will think when and if you go see it. It is a pile of horse shit. Now, going into this, I knew it was going to be bad. Just not this fucking bad. There isn’t a single funny joke in the movie. They try to be funny, but nothing even remotely works. The acting is atrocious. They couldn’t even pull off southern accents! What the fuck! Rednecks without a southern drawl? Impossible. Boss Hogg (played by Burt Reynolds) was total waste too . . . I used to love laughing at that fat character in the television show. In the movie he is just a cranky old fart. And dare I say it . . . Jessica Simpson bored the life right out of me. Fuck yeah, she has got a smoking body, but that is only shown for ten seconds throughout the 106 minutes of hell. They drew us in by the thousands with the promise of gold and delivered to us an aluminum can. Motherfuckers.

But alas, all is not lost. If you are a hillbilly, NASCAR lover then this movie will probably work for you. Just like the T.V. show, this movie is littered with exaggerated car races, chases and jumps. And the producers did all they could to make sure all the extras were good looking girls (but none of them are naked).

So basically, if you want to see a movie with no plot, terrible acting, no humor and no tits or ass, then The Dukes of Hazzard won’t disappoint. Otherwise, run. Run far away. And if you want to see Jessica Simpson, I would direct you to VH1 to see her music video for the song she did for the movie. You’ll be plenty more entertained. 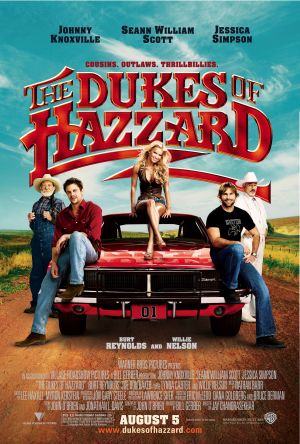