Well, it was bound to happen again. No, I don’t mean that the sun will surely rise in the east, as it always does. I mean, another attempt has been made to bring a comic book to the silver screen. Fantastic Four is another attempt by the movie studios to cash in on the comic book craze. Unfortunately, the one point that they miss time and again, is that no one gives a fuck about lame superheroes like The Fantastic Four! Really! Does anyone even read that shit? They should have learned from “Daredevil,” “Catwoman,” “Elektra” . . .

Back to the movie . . . since it’s not all bad. Granted, I could care less about Reed Richards (the elastic guy), Sue Storm (the invisible chick), Johnny Storm (the fire guy) or Ben Grimm (the big stony fucker), but I did like how Chris Evans portrayed Johnny Storm. He embraced his powers. He simply loved having them! It was great to see a change from the “how do I deal with this power” or “how do I get rid of this, I want to me normal” bullshit. I know I would go shit crazy with extraordinary powers, so it was a definite refresher to see someone embrace their powers as I would.

That’s about all that is good in Fantastic Four. I sure as hell don’t see all the hoopla over Jessica Alba (she plays Sue Storm). Sure she’s got a decent body, but I keep getting drawn to her lazy eye. Lazy eyes fuck everything up for me. Can’t get past them. Overall, the acting is weak, the character development is rather light — am I supposed to care that Reed has commitment issues? or that Ben’s wife leaves him one day after his accident? (what a complete bitch, by the way). Even the so-called action was a snorefest. Nothing exciting here, unless you want to play: Pick out the obvious CGI effects. 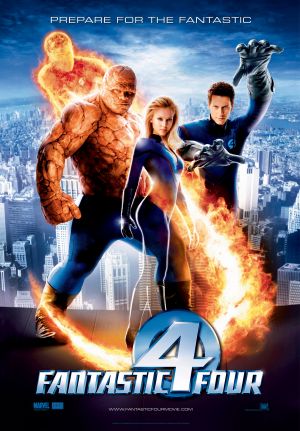